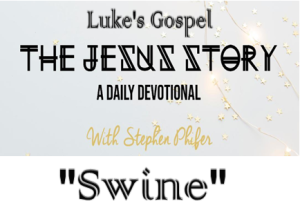 This was not the kind of welcoming committee anyone would request.
The boat landed on the other side of the Sea of Galilee. As Jesus stepped ashore, He was greeted, not with flowers and accolades from an adoring crowd, but by a naked crazy man. The poor fellow was driven mad by a host of demons who had taken residence in his soul. He was the bane of the town. He could not be contained, either in a house or in chains. When he was not driven into the surrounding wilderness, he lived among the tombs, sleeping, when He slept at all, in vacant tombs. His tortured cries stabbed the darkness every night with terror. This had gone on, in Dr. Luke’s terse description, “for a long time.”

The Welcome
Possibly sensing in some demonic way that Jesus was coming, and certainly knowing who Jesus was, the demons in the man met Him at the shore,

“What have I to do with You, Jesus, Son of the Most High God?
I beg You, do not torment me!”

Jesus, the Man of Peace, did not bring peace to demons, or to Pharisees and their kin, for that matter. The demons knew their peace was about to be disturbed. Jesus addressed the tormentors directly.

“What is your name?”

There was no escape for Satan’s minions. They had to answer to a higher authority.

This answer indicated that not one but many demons had found refuge in the life of the former friend and neighbor of the villagers. Speaking in a cacophony of hellish voices the demons begged for mercy.

A Herd of Swine,
At some distance, a large herd of hogs grazed, content and quite unaware and surely unimpressed by the doings of men. The demons asked to be transported to these convenient creatures. Jesus agreed and suddenly the peaceful pigs grew restless, then agitated, and finally, raving mad. With one mind, they ran down a steep place into the sea and were drowned. Their keepers panicked and ran into the village to report this destruction of property.

Brilliant Leaders
When the suddenly profitless owners came to investigate, they were in for another surprise—their local crazy man had been delivered! He sat peacefully at the feet of Jesus, clothed and in his right mind.

Reason, however, escaped the community leaders. Instead of welcoming their fellow citizen home and rejoicing in his deliverance, they formed a quick huddle and devised this strategy for the betterment of their town—ask Jesus to leave and never come back. As did those ignorant pigs, these leaders rushed blindly into a sea of stupidity and drowned each other.

Invited to Leave
Thusly invited to leave, Jesus started back onboard the boat to cross back to the other side, where people wanted Him. The delivered man sought to make the journey with Him but Jesus told him to stay home and tell his story to all who would listen. Someone had to demonstrate more wisdom than demons and hogs.

That night, the village was quiet. At no point did the familiar screams from the cemetery disturb the peace. However, people could not sleep in this unfamiliar silence. The arthritic were still stiff and in pain. The blind remained in their darkness as the sick, lame, impaired, and demon-infested sweated through another night. Their leaders had sent Jesus away.

Scriptures:
Luke: 8:26-39
Then they sailed to the country of the Gadarenes, which is opposite Galilee. And when He stepped out on the land, there met Him a certain man from the city who had demons for a long time. And he wore no clothes, nor did he live in a house but in the tombs. When he saw Jesus, he cried out, fell down before Him, and with a loud voice said, “What have I to do with You, Jesus, Son of the Most High God? I beg You, do not torment me!” For He had commanded the unclean spirit to come out of the man. For it had often seized him, and he was kept under guard, bound with chains and shackles; and he broke the bonds and was driven by the demon into the wilderness. Jesus asked him, saying, “What is your name?” And he said, “Legion,” because many demons had entered him. And they begged Him that He would not command them to go out into the abyss. Now a herd of many swine was feeding there on the mountain. So they begged Him that He would permit them to enter them. And He permitted them. Then the demons went out of the man and entered the swine, and the herd ran violently down the steep place into the lake and drowned. When those who fed them saw what had happened, they fled and told it in the city and in the country. Then they went out to see what had happened, and came to Jesus, and found the man from whom the demons had departed, sitting at the feet of Jesus, clothed and in his right mind. And they were afraid. They also who had seen it told them by what means he who had been demon-possessed was healed. Then the whole multitude of the surrounding region of the Gadarenes asked Him to depart from them, for they were seized with great fear. And He got into the boat and returned. Now the man from whom the demons had departed begged Him that he might be with Him. But Jesus sent him away, saying, “Return to your own house, and tell what great things God has done for you.” And he went his way and proclaimed throughout the whole city what great things Jesus had done for him.