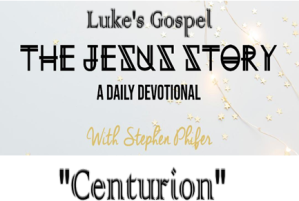 All Roman soldiers were not barbarians. “A certain centurion” had both an open mind and an open heart.
To rise to the rank of Centurion meant he was bright and responsible and was in direct command of 100 Roman soldiers. Evidently, he had great respect for the Jews and their religion and had even built them a synagogue.

One God Rather than Many
For a man of such intelligence, it made sense to consider the monotheism of the Jews rather than the polytheism of the Romans. Their gods were not even original creations; they were Greek retreads! It is likely that his friends, the leaders of the synagogue, had shared their history and beliefs with him. In these histories the officer saw the authority of the leaders who represented Jehovah on earth:

Stories like these made it easy for the Centurion to believe in the authority of Jesus.

A Favorite Servant Fallen Ill
This Roman officer valued human life, even the life of a servant. One of his personal staff, a man loved by the soldier, was ill to the point of death. Going through the leaders of the synagogue, the Centurion appealed to Jesus. When the leaders relayed his request to Jesus, the Lord started in that direction. When He was close to the soldier’s house, representatives met Him with these words of faith:

“Lord, do not trouble Yourself, for I am not worthy that You should enter under my roof. … say the word, and my servant will be healed…”

Jesus stopped to listen to the emissaries of the Centurion as they quoted the soldier:

“For I also am a man placed under authority, having soldiers under me. And I say to one, ‘Go,’ and he goes; and to another, ‘Come,’ and he comes; and to my servant, ‘Do this,’ and he does it.”

The Word of Faith
Jesus always responded to the faith of those who called on Him, but this was the most unusual statement of faith He had yet to hear. He found this mixture of humility and faith irresistible. He said as much to the crowd following Him.

“I say to you, I have not found such great faith, not even in Israel!”

It was at once a commendation and a condemnation. Why should a pagan soldier see Jesus more clearly than the People of God or even their leaders?

Another Healing
When the representatives of the Centurion returned to him, they found the servant completely healed—another healing registered from the hand and in the authority of Jesus. And so it would be for the rest of the earthly ministry of Jesus. Jesus would respond to the faith of those who called upon Him and thus it remains unto this very day.

Scriptures:
Luke: 7:1-10
Now when He concluded all His sayings in the hearing of the people, He entered Capernaum. And a certain centurion’s servant, who was dear to him, was sick and ready to die. So when he heard about Jesus, he sent elders of the Jews to Him, pleading with Him to come and heal his servant. And when they came to Jesus, they begged Him earnestly, saying that the one for whom He should do this was deserving, “for he loves our nation, and has built us a synagogue.” Then Jesus went with them. And when He was already not far from the house, the centurion sent friends to Him, saying to Him, “Lord, do not trouble Yourself, for I am not worthy that You should enter under my roof. Therefore I did not even think myself worthy to come to You. But say the word, and my servant will be healed. For I also am a man placed under authority, having soldiers under me. And I say to one, ‘Go,’ and he goes; and to another, ‘Come,’ and he comes; and to my servant, ‘Do this,’ and he does it.” When Jesus heard these things, He marveled at him, and turned around and said to the crowd that followed Him, “I say to you, I have not found such great faith, not even in Israel!” And those who were sent, returning to the house, found the servant well who had been sick.

Prayer:
Lord Jesus, I believe in You! Give me a faith like that of the Centurion—absolute confidence in Your authority. Birth a deep humility in me to bear that faith to You in prayer. Then I will know that nothing is impossible for me that is Your will! Let others count me worthy, but never let me boast in their assessment—all is for Your glory and never mine! I know that my victory comes only through faith in You. Amen and Amen.

1. Encamped along the hills of light,
Ye Christian soldiers, rise
And press the battle ere the night
Shall veil the glowing skies.
Against the foe in vales below
Let all our strength be hurled;
Faith is the victory, we know,
That overcomes the world.

2. His banner over us is love,
Our sword the Word of God;
We tread the road the saints above
With shouts of triumph trod.
By faith they, like a whirlwind’s breath,
Swept on o’er every field;
The faith by which they conquered death
Is still our shining shield.

3. To him who overcomes the foe
White raiment shall be giv’n;
Before the angels he shall know
His name confessed in heav’n
Then onward from the hills of light,
Our hearts with love aflame;
We’ll vanquish all the hosts of night
In Jesus’ conquering name.