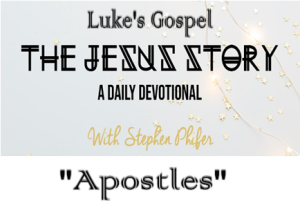 There is an important difference between disciples and apostles: A Disciple is a student; An Apostle is a messenger.
It was time for Jesus to select from among the multitudes that followed Him those who would be His primary representatives. To prepare for this crucial decision, He went to a solitary place and prayed through the night.

To the men whom He called with the words, “Follow Me!,” this was another camping trip. They did not know that Jesus was about to select 12 of them, lifting their calling above that of disciples—students and followers of Jesus—to apostles—commissioned messengers, sent into the world with a specific job to do. They slept somewhere on the beach or in leafy glades as was their custom when Jesus went into solitary confinement. As evening shadows crept over the Galilean hills, each of them wondered what the issue might be that took Jesus away from them for the night. Had they known, they would not have slept.

Choosing the Twelve
Somehow in the Lord’s progress through a night of communion with His Father, Jesus settled on 12 men to receive this commission to go into the whole world to tell His story. He was impressed that each of them had abandoned a normal life to answer His call. He remembered how He never gave them the details of where they might go if they followed Him. It was not a blind faith, but a trusting one, like the faith of Abraham, a faith centered in God and therefore, a sure, if unrevealed, faith.

Disciples and Apostles
All the people in the multitude had chosen to follow Jesus. He knew this and it gave Him joy. Some followed Him because they were sick and needed healing, or were impaired in some way and needed deliverance. Others responded to the genuine truth of His preaching; His unprecedented authority made them want to follow Him. All had the opportunity to become His disciples—students of His teaching, practitioners of principles. After the wild events with lame men dancing and dumb people singing, and dead people walking around and demon-infested people at peace, they must go back to their everyday lives, just as miraculously transformed on the inside, to live exemplary lives. They could choose to be His disciples. The twelve He chose could not return to their homes and former lives. Each one had a new life before him, one of travel and adventure, faith and power, danger and risk, spiritual warfare and heavenly reward. He would send them into the world to tell His Story.

A Healing Service
He called the twelve by name and then descended to a level place from which He delivered a sermon similar to the Sermon on the Mount. Before He spoke, the multitudes from Judea and Jerusalem arrived, possibly as a large pilgrimage from the south as well as from the coast lands to the west. There were so many who needed His touch. Luke’s description is quite moving:

“And they were healed. And the whole multitude sought to touch Him, for power went out from Him and healed them all.”

The Story to Tell
This is the story that has to be told—a God who is “God with Us!”—a Savior and a Healer and a Deliverer. Pain, impairment, addiction, disease, depression, and deceit all are remedied in Jesus. He has called disciples to live this story at home and He has chosen apostles to travel the world with this Good News.

Scriptures:
Luke: 6:12-19
Now it came to pass in those days that He went out to the mountain to pray, and continued all night in prayer to God. And when it was day, He called His disciples to Himself; and from them He chose twelve whom He also named apostles: Simon, whom He also named Peter, and Andrew his brother; James and John; Philip and Bartholomew; Matthew and Thomas; James the son of Alphaeus, and Simon called the Zealot; Judas the son of James, and Judas Iscariot who also became a traitor. And He came down with them and stood on a level place with a crowd of His disciples and a great multitude of people from all Judea and Jerusalem, and from the seacoast of Tyre and Sidon, who came to hear Him and be healed of their diseases, as well as those who were tormented with unclean spirits. And they were healed. And the whole multitude sought to touch Him, for power went out from Him and healed them all.

Prayer:
Lord Jesus, Your divine calling rests upon each of us! We are all called to live holy lives for You and to tell Your story to all who will listen and even to those appear not to be listening. We are all Your disciples! Some of us have also been called to the vocational ministry—commissioned by You and ordained by the church to do a specific work for You. Help us all be faithful to Your call, “Follow Me!” Amen and Amen.

Song:
We’ve a Story to Tell to the Nations
Words and Music: H. Ernest Nicol

Refrain:
For the darkness shall turn to dawning,
and the dawning to noonday bright,
and Christ’s great kingdom shall come on earth,
the kingdom of love and light.