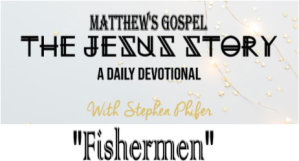 The Sea of Galilee had several names and was so full of fish as to be the source of wealth for the fishermen who plied their trade in her waters.
Here Jesus called the first of the Twelve who would follow Him in His earthly ministry. They were two sets of brothers:

Jesus saw this as a metaphor for the ministry to which He was calling them.

“Follow Me, and I will make you fishers of men.”

We are not told why they answered this call.
Why would successful businessmen leave the source of their livelihood behind—their family business in the case of James and John—to follow this man from Nazareth? Something happened that cannot be explained. Perhaps it was a look. Something in the way He looked at them caused them to see their nets and their lives in a new light. Something in His voice must have sounded a note of adventure in their hearts. Perhaps there was more to life than they had ever dreamed. Perhaps there was a cause bigger than getting through the day, something more than cleaning and repairing their nets for the next trip out to sea. Maybe life could be an adventure. On long lonely nights on the Galilee each man had entertained the thoughts of a life that he would never know beyond the familiar horizon. Maybe this man would lead them there.

Fishers of Men
What a strange promise:

“I will make you fishers of men.”

Whatever could that mean? How were people like fish? It was certain that there were many people, much like the abundance of fish in the sea. But how were they to be caught? What type of net would it require? And why? Why would people need to be caught? Wouldn’t it be kinder to leave them alone? Fishermen knew full well that getting caught was not good for the fish! Perhaps people were trapped in some way and needed to be caught and set free from a dangerous environment. Yes, that might be it!

One thing was sure; Jesus was talking about things for which all men long. He was talking about significance and influence. Any man worth his salt wants to be significant. He wants to matter in the eyes of the people around him. He wants people to listen when he speaks. When he is old and gray, he wants to sit with honor as an elder at the gate. Surely this would be the result of a life of significance and influence if one became a “fisher of men.”

Jesus called and they responded.
We can speak of these things today because Jesus is still calling people to follow Him. We cannot see His eyes or hear His voice with our eyes and ears but we can sense His call in our hearts. We can know that He is looking deep inside and saying to each of us, “Follow me and I will make you significant. Through you I will influence the world for the better. I will make you a fisher of men.”

Scriptures:
Matthew 4:18-22
And Jesus, walking by the Sea of Galilee, saw two brothers, Simon called Peter, and Andrew his brother, casting a net into the sea; for they were fishermen. Then He said to them, “Follow Me, and I will make you fishers of men.” They immediately left their nets and followed Him. Going on from there, He saw two other brothers, James the son of Zebedee, and John his brother, in the boat with Zebedee their father, mending their nets. He called them, and immediately they left the boat and their father, and followed Him.
Jeremiah 29:11-14
For I know the thoughts that I think toward you, says the Lord , thoughts of peace and not of evil, to give you a future and a hope. Then you will call upon Me and go and pray to Me, and I will listen to you. And you will seek Me and find Me, when you search for Me with all your heart. I will be found by you, says the Lord , and I will bring you back from your captivity; I will gather you from all the nations and from all the places where I have driven you, says the Lord , and I will bring you to the place from which I cause you to be carried away captive.

Prayer:
Lord Jesus, You see the value of each individual. None of us is on this earth by accident. You have a calling, a work, an anointing, for each of us. I want to be true to my call. I want to do my part as a “Fisher of Men.” I want to tell Your story to all who will listen. I want to tell it with my words, with my choices, with my actions, with my worship and with my very life. Help me touch those around me with Your kindness. Help me be an encourager of people, pointing them always to You, always to You. “Where You lead me, I will follow!” Thank You, Lord. Amen.

Song:
Where He Leads Me I Will Follow
Words: E.W. Blandy; Music: John S. Norris 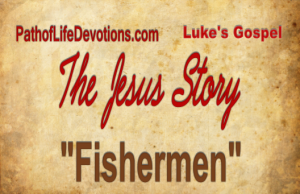 When the sun comes up each day we are relatively sure it will go down again in the world that saw it rise.
That would be the normal expectation of a normal day. If that sunrise was the start of a day when Jesus walked by, the world could change before sundown. So it was for two sets of brothers in the fishing business in the region of Galilee. Andrew and Peter were one set; James and John were their partners.

Business was good.
The water was clean and the fish were plentiful. Sometimes they were not easy to find, but they were there for the eventual finding and taking. The four fishermen were impressed with Jesus. Perhaps they had witnessed the deliverance of the demon-possessed man in the synagogue. Simon Peter’s wife’s mother had been healed of a high fever at this command. They had witnessed the healing service late in the day. On this day Jesus would ask for their help teaching His authoritative message. Who knew what miracles the rising sun might witness on such a day?

The four partners had fished through the night, never locating the fish they sought and were cleaning their nets before finally getting some rest. Their two boats were safely ashore as a growing crowd followed Jesus to the water’s edge.

Simon Peter’s Boat
Jesus knew that He could use one of the boats as a sort of speaking platform. The water around the boat would reflect and amplify His voice. He asked Simon Peter if he could cast out a little way from the shore. The fisherman was glad to help and felt honored that his boat was to be of use to this man who had healed his wife’s mother.

Just offshore, Jesus continued His teaching sitting in the boat. At first, the other three fishermen tried to continue working on their nets while Jesus spoke but this proved impossible. The authority of Jesus’ teaching, the depth of His insight, and the practicality of His instruction commanded their complete attention. The nets were forgotten.

“Launch out into the deep.”
When Jesus finished teaching, He asked Simon Peter and his partners to go out into the deep waters and use those nets, repaired or not. Simon protested that they had worked at it all night and there were no fish to be found in that area. As he spoke, Peter must have realized that with Jesus around things could change for the better in a hurry for he quickly agreed to give it a try.

Like they had done so many times before, the partners prepared their equipment and set out for deep waters. When Peter put down his net, a multitude of fish rushed to be captured! The hastily prepared net began to break and the boat was filled to overflowing with fish! Simon and Andrew called for their partners in the other boat. Soon both boats were filled and safely delivered back to port.

Simon fell to his knees confessing his sinfulness. We can be sure the other three did as well. Jesus seized the moment.

“Do not be afraid. From now on you will catch men.”

It was more than a miraculous catch; it was a calling. That day on the Sea of Galilee, the sun did not set on the same world upon which it rose that morning. Two sets of brothers forsook all to answer the call of Jesus.

Scriptures:
Luke: 5:1-11
So it was, as the multitude pressed about Him to hear the word of God, that He stood by the Lake of Gennesaret, and saw two boats standing by the lake; but the fishermen had gone from them and were washing their nets. Then He got into one of the boats, which was Simon’s, and asked him to put out a little from the land. And He sat down and taught the multitudes from the boat. When He had stopped speaking, He said to Simon, “Launch out into the deep and let down your nets for a catch.” But Simon answered and said to Him, “Master, we have toiled all night and caught nothing; nevertheless at Your word I will let down the net.” And when they had done this, they caught a great number of fish, and their net was breaking. So they signaled to their partners in the other boat to come and help them. And they came and filled both the boats, so that they began to sink. When Simon Peter saw it, he fell down at Jesus’ knees, saying, “Depart from me, for I am a sinful man, O Lord!” For he and all who were with him were astonished at the catch of fish which they had taken; and so also were James and John, the sons of Zebedee, who were partners with Simon. And Jesus said to Simon, “Do not be afraid. From now on you will catch men.” So when they had brought their boats to land, they forsook all and followed Him.

Prayer:
Lord Jesus, long ago I sensed Your call and I decided to follow You. Though I have sometimes failed to follow You, You have never failed to bring me back. Give me the proper spiritual vision to see what is really important. It isn’t the “business” life put me in—it is the ministry You have called me to. You will use my stuff, just as You used Peter’s boat and nets, but You are the One who does the work,  the One who has the reward. “The world behind me, the Cross before me!” Thank You, Jesus!