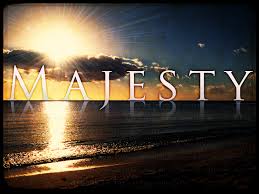 We long for majesty, for events of significance on a grand scale.
While there are times when we want to snuggle up in Father’s lap, each of us also wants to stand in awe of His majesty. We need the majesty of the King of kings and Lord of lords on the highest throne in heaven or on earth. We long for His majesty.

Isaiah 9:6-7
… the government will be on his shoulders. And he will be called Wonderful Counselor, Mighty God, Everlasting Father, Prince of Peace. Of the increase of his government and peace there will be no end. He will reign on David’s throne and over his kingdom, establishing and upholding it with justice and righteousness from that time on and forever

The prophecy of Isaiah speaks to the universal human need for majesty. When political systems and politicians fail to serve the interests of the people, those who serve Jesus can look forward to government resting securely on the shoulders of a leader who can balance governmental increase with peace. Jesus’ administration for a thousand years of peace will also be a time of unprecedented productivity as each of us finally fulfills the potential God created us to exercise.

The public mind is fascinated with ceremonies.
On a small scale, we rely on family weddings, anniversaries, birthdays, graduations, and memorial services to mark the passages of life. On a much larger scale, we love pageantry. We watch royal weddings, coronations, and passages of power from one leader to another. In America we feast on the parades, inaugurations, political conventions, award ceremonies, and championship games.

We want to be a vital part of a grand enterprise of cosmic significance. We want to locate our meaning somewhere in a great cause—“truth and justice for all.” Too often our institutions and leaders fail us. Any peek behind the pageantry reveals the absolute corruption of absolute power. We keep on hoping that the next congress, or administration, or court will embrace righteousness and we keep on getting our hearts broken.

On this day there is one who reigns with truth and justice for all. His name is Jesus.
He has shed His blood so that we can come before the same Throne seen by Isaiah under the Old Covenant and by the Apostle John under the New Covenant. The writer to the Hebrews describes the throng before the Throne.

Hebrews 12:18-24
You have not come to (Mt. Sinai) … you have come to Mount Zion, to the heavenly Jerusalem, the city of the living God. You have come to thousands upon thousands of angels in joyful assembly, to the church of the firstborn, whose names are written in heaven. You have come to God, the judge of all men, to the spirits of righteous men made perfect, to Jesus the mediator of a new covenant, and to the sprinkled blood that speaks a better word than the blood of Abel.

In Lord’s Day worship we take our places among the angels, saints, elders and flying creatures to sing of the majesty of God. The doorposts of Heaven shake with the sound of our music. Louder still is the sound of crowns crashing to the golden floor at the feet of the One Who Sits upon the Throne.

Breathe the atmosphere of His presence. Feel the vibration of His limitless power. See His majesty!

Scriptures:
Isaiah 9:6-7
… the government will be on his shoulders. And he will be called Wonderful Counselor, Mighty God, Everlasting Father, Prince of Peace. Of the increase of his government and peace there will be no end. He will reign on David’s throne and over his kingdom, establishing and upholding it with justice and righteousness from that time on and forever
Isaiah 6:1-8
In the year that King Uzziah died, I saw the Lord seated on a throne, high and exalted, and the train of his robe filled the temple. Above him were seraphs, each with six wings: With two wings they covered their faces, with two they covered their feet, and with two they were flying. And they were calling to one another: “Holy, holy, holy is the LORD Almighty; the whole earth is full of his glory.” At the sound of their voices the doorposts and thresholds shook and the temple was filled with smoke. “Woe to me!” I cried. “I am ruined! For I am a man of unclean lips, and I live among a people of unclean lips, and my eyes have seen the King, the LORD Almighty.” Then one of the seraphs flew to me with a live coal in his hand, which he had taken with tongs from the altar. With it he touched my mouth and said, “See, this has touched your lips; your guilt is taken away and your sin atoned for.” Then I heard the voice of the Lord saying, “Whom shall I send? And who will go for us?” And I said, “Here am I. Send me!”
Revelation 4:2-5:1
… I was in the Spirit, and there before me was a throne in heaven with someone sitting on it. And the one who sat there had the appearance of jasper and carnelian. A rainbow, resembling an emerald, encircled the throne. Surrounding the throne were twenty-four other thrones, and seated on them were twenty-four elders. They were dressed in white and had crowns of gold on their heads. From the throne came flashes of lightning, rumblings and peals of thunder. Before the throne, seven lamps were blazing. These are the seven spirits of God. Also before the throne there was what looked like a sea of glass, clear as crystal. In the center, around the throne, were four living creatures… Day and night they never stop saying: “Holy, holy, holy is the Lord God Almighty, who was, and is, and is to come.” Whenever the living creatures give glory, honor and thanks to him who sits on the throne and who lives for ever and ever, the twenty-four elders fall down before him who sits on the throne, and worship him who lives for ever and ever. They lay their crowns before the throne and say: “You are worthy, our Lord and God, to receive glory and honor and power, for you created all things, and by your will they were created and have their being.”

Prayer:
Lord Jesus, I echo the words of the psalmists: “The Lord Reigns!” Grant me a new vision of Your majesty—of a Savior from heaven, born to this earth, walking this life, killed on a cross, exiting a sealed tomb, walking this earth again in resurrection power, ascended to the throne of heaven and ruling now in absolute love. As I worship today, let me hear the sounds of singing angels, swooping around Your Throne. As the door posts of heaven shake, so also shake my heart so that I am changed to another increasing degree of glory. Let the train of Your robe fill the temple and cover my heart. May all the petty concerns that seek to occupy my time, fall victim to Your Majesty! Holy, Holy, Holy is the Lord God Almighty! Amen and Amen.

Majesty, worship his majesty;
Unto Jesus be all glory, honor, and praise.
Majesty, kingdom authority,
Flow from his throne unto his own, his anthem raise.

So exalt, lift up on high the name of Jesus.
Magnify, come glorify Christ Jesus, the King.
Majesty, worship his majesty,
Jesus who died, now glorified, King of all kings.