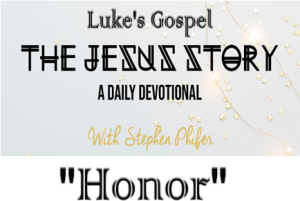 Strangers at the feast, a delegation of Greeks who had converted to Judaism, came to Jerusalem just in time for the entrance of Jesus.
Most likely, they were surprised by the unplanned, unofficial parade honoring Jesus. Who was this man? A prophet? Messiah? As they inquired of the people in the streets, they were quickly supplied with the amazing news of this man called Jesus. He was a healer, a teacher, one who could even raise the dead. Their curiosity aroused, they singled out Philip from among the followers of Jesus and inquired as to how they might interview Jesus. Their words have gone on to become the request of people around the world make to the followers of Jesus:

Their request went through channels.

“Philip came and told Andrew, and in turn Andrew and Philip told Jesus.”

Jesus had an answer for them. It had to do with honor.

“The hour has come.”
John does not tell us but let us imagine that the Greek proselytes followed Philip to Andrew and then to Jesus. If so, then the answer Jesus gave them, He also gave to the rest of the world.

“The hour has come that the Son of Man should be glorified.”

The years of preparation were done. The time of itinerant ministry had come and gone. A line of destiny had been crossed and now the drama of redemption was underway. It was important that Greeks, who had submitted to the religion of Jehovah and had been grafted into the Vine of Israel, would now hear what Jesus was about to say. His glorification was not to be merely a Jewish event—He was “the Lamb of God who takes away the sins of the world” to quote His forerunner, John the Baptist.

“Most assuredly, I say to you, unless a grain of wheat falls into the ground and dies,
it remains alone; but if it dies, it produces much grain.”

Glorification
Drawing upon familiar images of sowing and reaping, Jesus framed the method of His glorification. There was a harvest of souls to be gleaned but first there must be a planting—the death and burial of a seed. His story was unfolding before their eyes and it was to be the story of each of His followers.

“He who loves his life will lose it,
and he who hates his life in this world will keep it for eternal life.”

The Greek believers knew they had found Messiah, not just a Jewish Messiah, but the Redeemer of all the world. They fell to their knees in honor of Jesus, knowing that the One True God whom they had found, would also someday honor them.

Scriptures:
John 12: 20-26
Now there were certain Greeks among those who came up to worship at the feast. Then they came to Philip, who was from Bethsaida of Galilee, and asked him, saying, “Sir, we wish to see Jesus.” Philip came and told Andrew, and in turn Andrew and Philip told Jesus. But Jesus answered them, saying, “The hour has come that the Son of Man should be glorified. Most assuredly, I say to you, unless a grain of wheat falls into the ground and dies, it remains alone; but if it dies, it produces much grain. He who loves his life will lose it, and he who hates his life in this world will keep it for eternal life. If anyone serves Me, let him follow Me; and where I am, there My servant will be also. If anyone serves Me, him My Father will honor.

Prayer:
Lord, I rejoice that Your grand plan of redemption includes me but help me to never forget just how grand this plan really is! You came to save the world and that salvation is available to all who will simply believe in You, repent of their sins and confess You as Lord. Just as Greeks could become Jews, all races can become followers of Christ and members of Your family, the Church! I will follow You and one day, I will hear You call my name and say, “Well done!” What else matters? Thank You, Lord!

1. It may not be on the mountain’s height, Or over the stormy sea;
It may not be at the battle’s front My Lord will have need of me.
But if by a still, small voice He calls To paths I do not know,
I’ll answer, dear Lord, with my hand in Thine,
“I’ll go where You want me to go.”

2. Perhaps today there are loving words Which Jesus would have me speak;
There may be now, in the paths of sin, Some wand’rer whom I should seek.
O Savior, if Thou wilt be my Guide, Tho’ dark and rugged the way,
My voice shall echo the message sweet,
I’ll say what you want me to say.

3. There’s surely somewhere a lowly place In earth’s harvest fields so wide
Where I may labor thro’ life’s short day For Jesus, the Crucified;
So, trusting my all to Thy tender care, And knowing Thou lovest me,
I’ll do Thy will with a heart sincere,
I’ll be what You want me to be.