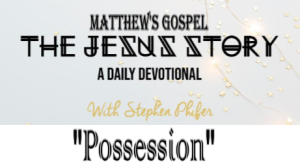 Sometimes evil lies buried deep in the hearts of people. Sometimes it doesn’t.
We don’t know for how many years the quiet Galilean village knew a deep municipal peace. At some point it ended in noise and violence. Two demon-possessed men took up residence in the town cemetery. Evidently they would run from the tombs without warning, screaming as they blocked the passage of passersby. The violence of their madness disturbed the peace of this formerly quiet village. No one could control them. Funerals were a nightmare as mourners were never sure when the demonized duet would attack. Like a pair of hunting lions they would attack from two directions at once, cutting off any hope of escape. These poor men are described by Mathew as “exceedingly fierce.” At night there was no relief for the midnight hours hosted evil concerts of their screams and laments. Beneath it all, these two men were as miserable as the villagers they tormented.

Then came Jesus
When Jesus came to the village, everything changed. The tormented, possessed men turned their attention to Him. Here was someone they could not intimidate. The demons possessing these men did not need to be informed of who  Jesus really was. Hell knows heaven when it visits. Mean and tough? The demons cried for mercy. One man gave hell a voice:

“What have we to do with You, Jesus, You Son of God?

The other man elaborated:

“Have You come here to torment us before the time?”

To all appearances, it was a standoff, a showdown of good against evil. Really, it was no contest at all.

Convenient Swine
Fortunately for everyone, except the owner of the hogs, a herd of swine was feeding on a precipice that over looked the Sea of Galilee. Knowing they were outmatched, the demons seized the opportunity to escape.

“If You cast us out, permit us to go away into the herd of swine.”

A smile from Jesus and a single word granted the demons their wish.

They went. The two men collapsed as the demons departed, screaming with their own voices for a change. Nothing was visible to the gathering crowd during this transfer but the unsuspecting pigs took up the screaming as a flood of demons invaded their porcine frames. They forgot about feeding and began to run amok spreading onlookers in all directions. Like a flock of birds mysteriously all turning at once, the herd turned away from the crowd toward the sea. One by one they dove from the precipice into the waters. Although swine can swim, these pigs chose not to. They would rather die than host demonic spirits. Their keepers fled from Jesus into the town and told everyone what happened.

A Grateful Village?
The two men lay quietly on the ground. Carefully, some compassionate person brought them clothes and some water. One would think that townspeople would come to Jesus expressing their appreciation for this miracle. This was not the case. The town leaders, with an approving crowd behind them approached Jesus with their own strange request: Go away!

How many of them in the days ahead, as the fame of Jesus and the tales of His miracles continued to spread throughout Galilee, would be kept awake at night by the eerie silence from the cemetery? Possessed as they were by such short-sightedness, did they realize their moment of deliverance had passed?

Sometimes evil lies buried deep in the hearts of people.

Scriptures:
Matthew 8:28-34
When He had come to the other side, to the country of the Gergesenes, there met Him two demon-possessed men, coming out of the tombs, exceedingly fierce, so that no one could pass that way. And suddenly they cried out, saying, “What have we to do with You, Jesus, You Son of God? Have You come here to torment us before the time?” Now a good way off from them there was a herd of many swine feeding. So the demons begged Him, saying, “If You cast us out, permit us to go away into the herd of swine.” And He said to them, “Go.” So when they had come out, they went into the herd of swine. And suddenly the whole herd of swine ran violently down the steep place into the sea, and perished in the water. Then those who kept them fled; and they went away into the city and told everything, including what had happened to the demon-possessed men. And behold, the whole city came out to meet Jesus. And when they saw Him, they begged Him to depart from their region.

Prayer:
Lord Jesus, You have dominion over the powers of hell. In Your name, I have mastery over them. Reach down into my life and break any connections the enemy has forged in me and set me free from demonic influence. Keep me from the attitude of those village leaders who sent You away. Stay with me Lord! Continue the works You have begun in me! You are my hope, my defense, my promise of life here and now and life in the hereafter. All of this in the power of Your Name! Amen.