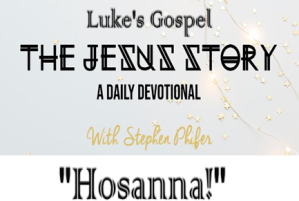 It was a crowd, to be sure, that filled the streets of Jerusalem, but we must not see them as nameless and faceless.
They were everyday people with all the inner conflicts and life-struggles common to life then and life today. They could see that there was something different about Jesus. He was a good speaker, but it was more than that. He was kind to all (except the crooks and criminals who ran the place) but He was more than just a good man. There was power in Him, a power that could flow out from Him to meet the most desperate needs. Many had seen it happen and all had heard the stories.

Messiah?
The subtext of life in Jerusalem under Roman rule was the longing for Messiah, the long-promised Deliverer who would restore true worship and bring Jehovah God back to His covenantal promises of freedom and prosperity. It was easy for each citizen to fill in the blanks of what Messiah might do for him or her. Why not? They were God’s Covenantal People. If they were true to their part of the covenant, the same God who parted the Red Sea for Moses, made the Jordan roll up on one side for Joshua and made the sun stand still in the sky till the battle was won could help each of them out a little!

Hosanna!
The Passover feast was underway and the celebrants jamming the streets heard that Jesus was on His way to the city. If He was reluctant to make His Messianic claim, perhaps they could help Him a little. They cut branches from palm trees and went out to meet Him. Some even spread their own cloaks and outer garments in His pathway, treating Him like a king. They had known songs for the Messiah since they were children and took to them as if well-rehearsed.

“Hosanna!”
“Blessed is He who comes in the name of the Lord!’
“The King of Israel!”

Musicians appeared playing pipes, drums, and tambourines. Dancers whirled to the music as joy and hope danced together in the streets of Jerusalem. Such a display was sure to bring Him out of His reluctance.

Jesus was riding a young donkey, just as was prophesied. His men were confused. Why had He been so careful just a few days before just to make such a public declaration now? Later, they would understand but on this day, they possessed only questions and fears.

Driven by Needs
Why the celebration? The raising of Lazarus spurred the hopes of the people. If Jesus could do that, He must be Messiah! When He came to the throne, surely He would meet the needs of the nation and those of the people.

The songs of the people calling for Messiah continued unabated. The Pharisees saw that they were defeated again. They had no way of discounting the Lazarus miracle or stopping the people as they made this dangerous declaration. Realizing they were about to lose their positions of power, they murmured among themselves.

“ You see that you are accomplishing nothing. Look, the world has gone after Him!”

The music, the dancing, and the joyful shouts of the crowd drowned out the sound of the murmuring.

Scriptures:
John 12:12-19
The next day a great multitude that had come to the feast, when they heard that Jesus was coming to Jerusalem, took branches of palm trees and went out to meet Him, and cried out: “Hosanna! ‘Blessed is He who comes in the name of the Lord !’ The King of Israel!” Then Jesus, when He had found a young donkey, sat on it; as it is written: “Fear not, daughter of Zion; Behold, your King is coming, Sitting on a donkey’s colt.” His disciples did not understand these things at first; but when Jesus was glorified, then they remembered that these things were written about Him and that they had done these things to Him. Therefore the people, who were with Him when He called Lazarus out of his tomb and raised him from the dead, bore witness. For this reason the people also met Him, because they heard that He had done this sign. The Pharisees therefore said among themselves, “You see that you are accomplishing nothing. Look, the world has gone after Him!”

Prayer:
Lord Jesus, according to the psalms we must say among the nations, “The Lord Reigns!” It is so and we proclaim it. Motives may have been mixed in the streets of Jerusalem that day, but our motives are singular!—We crown You King! There is none beside You, none worthy to be compared with You! Of all kings, You are King. Of all lords, You are Lord. Of all princes, You are the Prince of Peace! Receive the humble crown we offer You, for it is only our hearts but You have chosen to make Your throne there! Hosanna to the King!