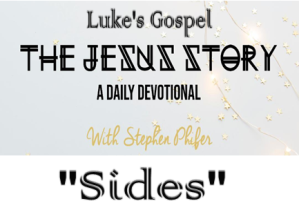 Like children playing tag, we find ourselves on one side or the other.
In the innocent games of children, someone chooses who will be on whose side. In the games of life, we are free to choose the side we will join.

Jesus tried to tell them.
Things were about to change. With all His power to change people’s lives, Jesus felt unable to get through to His disciples that these good times were about to come to a violent end. So impressed were they with the demonstrated majesty of God, they went into a massive state of denial, busying themselves with other, more delicious games like this one: Who will be the greatest among them?

An Object Lesson
Jesus approached a young mother holding her child close to her heart. He asked if she would let Him hold the little one. She agreed, automatically trusting this man from God. Jesus set the toddler next to Him on a large boulder nearby. He let the image of the child next to the man sink into the minds of everyone watching. Eventually, He made the application.

Not rulers, not scholars, not kings, not prophets, not the rich and influential, but the child, the innocent, unspoiled, happy child will be the truly great in the Kingdom to come. Glances from all those thusly disqualified for greatness darted like so many angry hornets among the ambitious ones in the crowd. Before their questions and objections could be voiced, Jesus continued.

“For he who is least among you all will be great.”

Nonsense! Stuff and nonsense! This man was unhinged! No one with any intelligence at all who heard this philosophy will volunteer to be on His side in the game.

Those Other Disciples
A strange report came to John the disciple: People outside of their group were casting out demons in Jesus’ name. The disciples tried to shut the opposing group down.

“Do not forbid him, for he who is not against us is on our side.”

The Road to Jerusalem
Dr. Luke designates this moment as the turning point in the public ministry of Jesus. No longer would He go from town to town preaching and working wonders. In the author’s words:

“He steadfastly set His face to go to Jerusalem.”

Jesus sent men ahead to prepare the way. Some places refused Him, igniting fiery anger from the Twelve. Jesus corrected them, reminding them that their mission was to give life not take it. Along the way a man volunteered to join the group. Jesus answered him with the costs of such a commitment. He invited others to follow but they had family obligations that delayed them.

To follow Jesus and be on His side meant forsaking all. It is a decision that must not be revoked.

“No one, having put his hand to the plow, and looking back,
is fit for the kingdom of God.”

Scriptures:
Luke: 9:43-62
And they were all amazed at the majesty of God. But while everyone marveled at all the things
which Jesus did, He said to His disciples, “Let these words sink down into your ears, for the
Son of Man is about to be betrayed into the hands of men.” But they did not understand this saying, and it was hidden from them so that they did not perceive it; and they were afraid to ask Him about this saying. Then a dispute arose among them as to which of them would be greatest. And Jesus, perceiving the thought of their heart, took a little child and set him by Him, and said to them, “Whoever receives this little child in My name receives Me; and whoever receives Me receives Him who sent Me. For he who is least among you all will be great.” Now John answered and said, “Master, we saw someone casting out demons in Your name, and we forbade him because he does not follow with us.” But Jesus said to him, “Do not forbid him, for he who is not against us is on our side.” Now it came to pass, when the time had come for Him to be received up, that He steadfastly set His face to go to Jerusalem, and sent messengers before His face. And as they went, they entered a village of the Samaritans, to prepare for Him. But they did not receive Him, because His face was set for the journey to Jerusalem. And when His disciples James and John saw this, they said, “Lord, do You want us to command fire to come down from heaven and consume them, just as Elijah did?” But He turned and rebuked them, and said, “You do not know what manner of spirit you are of. For the Son of Man did not come to destroy men’s lives but to save them.” And they went to another village. Now it happened as they journeyed on the road, that someone said to Him, “Lord, I will follow You wherever You go.” And Jesus said to him, “Foxes have holes and birds of the air have nests, but the Son of Man has nowhere to lay His head.” Then He said to another, “Follow Me.” But he said, “Lord, let me first go and bury my father.” Jesus said to him, “Let the dead bury their own dead, but you go and preach the kingdom of God.” And another also said, “Lord, I will follow You, but let me first go and bid them farewell who are at my house.” But Jesus said to him, “No one, having put his hand to the plow, and looking back, is fit for the kingdom of God.”

Prayer:
Lord Jesus, I will follow You. I want to be on Your side. I have put my hand to the plow and I see no reason to turn back. Where would I go? Yours are the Words of eternal life! Yours is the side of victory! Your team is the winning team. Life isn’t a game but it is a competition. It is a contest of good vs. evil, a contest that can only be won through Your victory. I will take up my cross—it was made especially for me!—and I will follow You! How can I do anything less? All for You, Lord Jesus!

Song:
Take Up Thy Cross and Follow Me
Words and Music: A. H. Ackley

1. I walked one day along a country road,
And there a stranger journeyed, too,
Bent low beneath the burden of His load:
It was a cross, a cross I knew.

Refrain:
“Take up thy cross and follow Me,”
I hear the blessed Savior call;
How can I make a lesser sacrifice,
When Jesus gave His all?

2. I cried, “Lord Jesus,” and He spoke my name;
I saw His hands all bruised and torn;
I stooped to kiss away the marks of shame,
The shame for me that He had borne.

4. My cross I’ll carry till the crown appears—
The way I journey soon will end—
Where God Himself shall wipe away all tears,
And friend hold fellowship with friend.