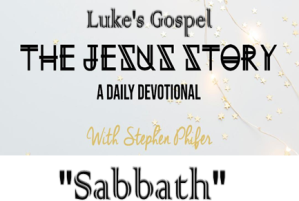 The most fundamental law of the Covenantal worship of Jehovah concerned honoring the Sabbath and keeping it holy.
The critics of Jesus, scorekeepers every one, watched for the slightest violation of Sabbath principles. It never occurred to them that Jesus might be Lord of the Sabbath but they were about to discover this.

First Offence
His men were hungry. Regular meals were not a feature of following Jesus. They passed through some fields of grain just when the wheat was right for the picking. It was the Sabbath and harvesting grain was forbidden on the Sabbath. Score one for the Pharisees.

“Why are you doing what is not lawful to do on the Sabbath?”

Their frowns were deeper than rows plowed deep. The disciples stopped harvesting and rubbing out the wheat in their hands, but several of them had already filled their mouths. Trying not to chew, they waited to see how Jesus would respond. The smile on His face told them all they needed to know. When He started speaking they went back to munching. Jesus gave the guardians of the Law a Bible lesson.

“Have you not even read this, what David did when he was hungry…how he went into the house of God, took and ate the showbread, and also gave some to those with him…?”

The Pharisees had no answer. Was that really in the Bible? They exchanged glances until the most informed among confirmed the story Jesus told. It was just a warmup for the thing Jesus really wanted them to know.

“The Son of Man is also Lord of the Sabbath.”

The scorekeepers were stunned by this heresy. No one was Lord of the Sabbath, no one but God Himself! They could never have anticipated this statement and they had no answer for it except the noise of their ignorance.

Second Offence
Probably a week later, Jesus was teaching in the synagogue. The Pharisees couldn’t stop Him but they could watch Him and take notes. A man with a withered hand was in attendance. It was his habit to hide his short arm within the sleeve of his robe. The last thing he wanted to do was attract attention. The scorekeepers saw their opportunity. They somehow drew the attention of the people to the unfortunate man. He tried to find a place to hide and tucked his mangled arm out of sight.

Jesus called the man out.

He smiled at the man to assure him that He was not being cruel. He turned to the Pharisees with a question:

“Is it lawful on the Sabbath to do good or to do evil, to save life or to destroy?”

To the man He said,

“Stretch out your hand.”

Suddenly, accompanied by the snap of bones and the surprised cry of the man, the withered hand filled out to its proper length. The man flexed the fingers and stared at the one hand now made whole and began to clap both hands together. Worshipers joined in and the clapping became a beat and then the beat became a song.

The Pharisees didn’t feel like singing. What were they supposed to do with a man with this kind of power who claimed to be the Lord of the Sabbath?

Scriptures:
Luke: 6:1-11
Now it happened on the second Sabbath after the first that He went through the grainfields. And His disciples plucked the heads of grain and ate them, rubbing them in their hands. And some of the Pharisees said to them, “Why are you doing what is not lawful to do on the Sabbath?” But Jesus answering them said, “Have you not even read this, what David did when he was hungry, he and those who were with him: how he went into the house of God, took and ate the showbread, and also gave some to those with him, which is not lawful for any but the priests to eat?” And He said to them, “The Son of Man is also Lord of the Sabbath.” Now it happened on another Sabbath, also, that He entered the synagogue and taught. And a man was there whose right hand was withered. So the scribes and Pharisees watched Him closely, whether He would heal on the Sabbath, that they might find an accusation against Him. But He knew their thoughts, and said to the man who had the withered hand, “Arise and stand here.” And he arose and stood. Then Jesus said to them, “I will ask you one thing: Is it lawful on the Sabbath to do good or to do evil, to save life or to destroy?” And when He had looked around at them all, He said to the man, “Stretch out your hand.” And he did so, and his hand was restored as whole as the other. But they were filled with rage, and discussed with one another what they might do to Jesus.

Prayer:
Lord Jesus, I love Your holy day! This is the central organizational point of the week. It is Yours, not ours. It is a gift from You. I repent of the times when I felt like it was my day, to spend or waste or use as I pleased. Not true. It is Your day for all its 24 hours. I will join Your church to minister unto You giving You the glory due to Your name! I will worship and I will rest, for this, too, is the Sabbath. You are indeed the Lord of the Sabbath! Thank, You, Lord!

1. This is the day the Lord has made;
He calls the hours His own;
let heav’n rejoice, let earth be glad,
and praise surround the throne.

2. Today he rose and left the dead,
and Satan’s empire fell;
today the saints His triumphs spread,
and all His wonders tell.

3. Hosanna to th’anointed King,
to David’s holy Son.
help us, O LORD, descend and bring
salvation from Your throne.

4. Blest be the Lord, who comes to us
with messages of grace;
who comes, in God His Father’s name,
to save our sinful race.