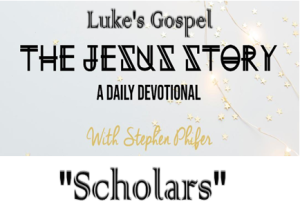 By the time Jesus was 12 years old, Joseph and Mary seemed to forget who He really was.
Each year, the family (Joseph and Mary had their own children by that time.) repeated the journey from Nazareth to Jerusalem for Passover. Perhaps they busied themselves with the other children and left Jesus to His own devices. He was never any trouble anyway.

When the feast was over, everyone started for home, supposing Jesus to be with the entourage. He wasn’t. One day out, they realized this and returned to Jerusalem to find Him. It took them three days to think of the Temple. If they had been paying attention, they would have seen how the Temple fascinated the 12-year old Jesus. He was transfixed by the ceremony, the colors, the music, and the constant chanting of the Psalms. He knew all the psalms by heart but hearing them in the Temple gave them a thrilling new context.

He never left the Temple
The other pilgrims finished their obligatory worship and headed for home, eager to get back to their businesses. Jesus had just found His business and could not leave it. The Temple was His Father’s house. The psalms were addressed to His Heavenly Father! He belonged here! This place held a vital connection to His mission—the business His Father had sent Him to do. Thoughts of Nazareth and Mary and Joseph and the growing family seemed distant and disconnected.

Jesus and the Scholars
Like all academics, they were a mixed crowd. Many of them were sincere students of the Word and others were in it for power and prestige. Regardless of their heart conditions, all of them knew the Word of God. Imagine what it was like for them to see this little boy emerge from the crowd to ask them questions. This was flattering, of course. Men with all the answers love to entertain questions from lesser beings.

This boy was different. His questions sprang from an intense knowledge of the Word, not from ignorance of the law. For three days the Q and A continued. The boy never seemed to tire and he wore out group after group of the finest minds in the Temple. He asked questions they never before considered and for which they had no answers. The sincere ones kept the conversation going. Jesus was feeding their souls with truth. When the first night came, they took care of Jesus and were surprised when he peacefully slept in the quarters they provided. Shouldn’t a lost boy cry for his parents at night? Evidently not. The power-hungry priests were embarrassed and annoyed that this presumptuous little fellow could do this to them. They huddled together and decided to mark Jesus as a man to be watched. He might get one of their jobs one day.

The Return of Mary and Joseph
Late on the third day, Mary and Joseph found Jesus in the Temple teaching the scholars. They were embarrassed and rebuked Jesus. How could He do this to them? His answer sounds a bit rude to us but it really tells the tale.

“Why did you seek Me? Did you not know that I must be about My Father’s business?”

This answer confused the priests. Wasn’t His father the carpenter? The Temple was not his business place.

Joseph and Mary thanked the scholars and hurried Jesus out of there and back to Nazareth. Jesus submitted to them for this, too, was His Father’s business.

Scriptures:
Luke: 2:39-52
So when they had performed all things according to the law of the Lord, they returned to Galilee, to their own city, Nazareth. And the Child grew and became strong in spirit, filled with wisdom; and the grace of God was upon Him. His parents went to Jerusalem every year at the Feast of the Passover. And when He was twelve years old, they went up to Jerusalem according to the custom of the feast. When they had finished the days, as they returned, the Boy Jesus lingered behind in Jerusalem. And Joseph and His mother did not know it; but supposing Him to have been in the company, they went a day’s journey, and sought Him among their relatives and acquaintances. So when they did not find Him, they returned to Jerusalem, seeking Him. Now so it was that after three days they found Him in the temple, sitting in the midst of the teachers, both listening to them and asking them questions. And all who heard Him were astonished at His understanding and answers. So when they saw Him, they were amazed; and His mother said to Him, “Son, why have You done this to us? Look, Your father and I have sought You anxiously.” And He said to them, “Why did you seek Me? Did you not know that I must be about My Father’s business?” But they did not understand the statement which He spoke to them. Then He went down with them and came to Nazareth, and was subject to them, but His mother kept all these things in her heart. And Jesus increased in wisdom and stature, and in favor with God and men.

Prayer:
Lord Jesus, You are the living Word. Those scholars in the Temple had no way of knowing that You knew the Word because You are the Word. But I know this and believe it with all my heart. Illumine my every step, O Lamp of God! Give light to my path, O Light of the World! The world around me is shrouded in darkness but Your Light shines on me, just as Isaiah promised. As I walk in this light, help me show the light to those who walk in darkness! For Your glory, Lord! Amen and Amen.

When I feel afraid, think I’ve lost my way,
still you’re there right beside me,
and nothing will I fear as Iong as you are near.
Please be near me to the end.

Thy word is a lamp unto my feet
and a light unto my path.

2. Thy word is a lamp unto my feet
and a light unto my path.

I will not forget your love for me,
and yet my heart forever is wandering.
Jesus, be my guide and hold me to your side,
and I will love you to the end.

Thy word is a lamp unto my feet
and a light unto my path.