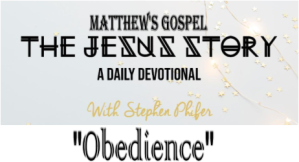 Obedience to the commands of God is a great power, so often overlooked
The scribe who came to Jesus announcing his intention to follow Jesus wherever He might lead was a brave man. Most of this tribe of leaders were violently opposed to Jesus so this man was breaking ranks; that takes courage. Matthew’s designation of “a certain scribe” indicates that he was a leader of some note. What gave him such courage?

We are told only that he came to Jesus as a turning point in his life.

Jesus and the men were about to cross the Sea of Galilee; this conversation halted their preparations to sail. Jesus looked deep into the man’s eyes and into his spirit to see the sincerity behind the courage. This was no time to go easy on a potential follower.

“Foxes have holes and birds of the air have nests,
but the Son of Man has nowhere to lay His head.”

We are not told how the man responded but it is likely that he obeyed the call of Jesus. In a rapid inventory of his life he counted everything as worthless except to follow this healer/teacher.

There is no way to tell but we know that to obey the Lord is a powerful thing indeed.

No Time for Funerals
Another follower of Jesus needed to attend to some family business before He could follow Jesus; a father needed to be buried. We are not told if the man’s father was old and about to die, or in poor health, or had already passed. Jesus’s answer to this objection seems harsh:

“Follow Me, and let the dead bury their own dead.”

Sometimes obeying the Lord demands swift and sacrificial action. All things considered, it is better to follow now regardless of the cost.

The Winds and the Seas
When the voyage across the lake finally began, a violent storm set in, threatening the boat itself. The disciples were distraught while Jesus was asleep. They called to him and He stood up in the boat and rebuked the storm. It was replaced by a great calm. Even the winds and sea obeyed the voice of Jesus.

Obedience to the commands of God is a great power, so often overlooked.

Scriptures:
Matthew 8:18-34
And when Jesus saw great multitudes about Him, He gave a command to depart to the other side. Then a certain scribe came and said to Him, “Teacher, I will follow You wherever You go.” And Jesus said to him, “Foxes have holes and birds of the air have nests, but the Son of Man has nowhere to lay His head.” Then another of His disciples said to Him, “Lord, let me first go and bury my father.” But Jesus said to him, “Follow Me, and let the dead bury their own dead.” Now when He got into a boat, His disciples followed Him. And suddenly a great tempest arose on the sea, so that the boat was covered with the waves. But He was asleep. Then His disciples came to Him and awoke Him, saying, “Lord, save us! We are perishing!” But He said to them, “Why are you fearful, O you of little faith?” Then He arose and rebuked the winds and the sea, and there was a great calm. So the men marveled, saying, “Who can this be, that even the winds and the sea obey Him?”

Prayer:
Lord Jesus, help me see today the power of obedience to Your command. You will command any storms I may face. You will help me sort out my duties each day as I prioritize obedience to Your Word. Lord, I long to follow You wherever You lead, whatever the cost. Help me to trust and obey! Amen and amen.

1. When we walk with the Lord in the light of his word,
What a glory he sheds on our way!
While we do his good will, he abides with us still,
And with all who will trust and obey.

Refrain:
Trust and obey, for there’s no other way
to be happy in Jesus, but to trust and obey.

2. Not a burden we bear, not a sorrow we share,
But our toil he doth richly repay; not a grief or a loss,
Not a frown or a cross, but is blest if we trust and obey.

3. But we never can prove the delights of his love
Until all on the altar we lay; for the favor he shows,
For the joy he bestows, are for them who will trust and obey.

4. Then in fellowship sweet we will sit at his feet,
Or we’ll walk by his side in the way;
What he says we will do, where he sends we will go;
Never fear, only trust and obey.