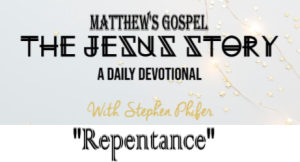 In modern Christian circles we tend to think of repentance as the final goal of our witness. Actually, it is the beginning.
The meaning of the word is simple and beyond dispute: it means to turn around. It is a deliberate reversal. Instead of traveling north we do a 180º turn and start traveling south. This is the first step in following Christ and it is a step often repeated on the Path of Life because we tend to get sidetracked onto useless paths that lead to destruction though at first they seemed right to us. When the Holy Spirit convicts us that we are on a path to destruction, we need to repent and get back on the Path of Life!

John’s Call to Reversal
John, the Forerunner of Christ, stood in the waters of the Jordan River and called for a reversal in the ways of his generation. He was not gentle.

“Brood of vipers! Who warned you to flee from the wrath to come?
Therefore bear fruits worthy of repentance…”

He called his generation’s leaders snakes—not exactly good PR and very poor “optics” as they say in politics today. But this was his message, his mission. He was not called to be gentle; he was called to tell the truth to his generation. Change was coming and repentance was the first step in preparation for the change. Results rescue repentance from being just an act of public theatre.  Repentance is a real reversal of the heart. “Fruit worthy of repentance” was John’s demand. When we really repent, our lives produce a different set of results.

These things are the tests of true repentance. Words without a reversal of conduct are worthless.

Heritage does not automatically transfer.
The object of John’s preaching claimed to be children of Abraham, as if their bloodline won them favor with God. While Jehovah is a covenant-keeping God and will be true to His promises to bless Israel, those promises included warnings against apostasy—falling away from true worship and godly living. Their heritage had merit as long as their personal conduct was in keeping with the Law and such was not the case. John as much as said, “Big deal!”

“God is able to raise up children to Abraham from these stones.”

It was the day of reversal, of pruning the national tree and the ax was already at the root.

Water and Fire
Standing and preaching in the river, John plunged the repentant ones under the water as a public act representing the inward reversal in their lives. For those people it was a dividing line in their lives. How many of these people would be the ones to be healed or delivered by the hand and Word of Jesus? How many of these would be miraculously fed in the wilderness? How many would witness the resurrection of Lazarus? There is no way to know, of course, but this act of preparation was the first step in preparing for Jesus to walk among them in power.

Standing and preaching in the river, John prophesied about another baptism to come, one not of water but of fire, the fire of the Holy Spirit. The cleansing begun in the waters of repentance would continue in the fires of the Spirit. God would raise up children of Abraham from every nation of the world.

And it has been so!

Scriptures:
Matthew 3:7-12
But when he saw many of the Pharisees and Sadducees coming to his baptism, he said to them, “Brood of vipers! Who warned you to flee from the wrath to come? Therefore bear fruits worthy of repentance, and do not think to say to yourselves, ‘We have Abraham as our father.’ For I say to you that God is able to raise up children to Abraham from these stones. And even now the ax is laid to the root of the trees. Therefore every tree which does not bear good fruit is cut down and thrown into the fire. I indeed baptize you with water unto repentance, but He who is coming after me is mightier than I, whose sandals I am not worthy to carry. He will baptize you with the Holy Spirit and fire. His winnowing fan is in His hand, and He will thoroughly clean out His threshing floor, and gather His wheat into the barn; but He will burn up the chaff with unquenchable fire.”
Proverbs 14:12
There is a way that seems right to a man, But its end is the way of death.
2 Peter 3:9
The Lord is not slack concerning His promise, as some count slackness, but is longsuffering toward us, not willing that any should perish but that all should come to repentance.
2 Corinthians 7:9-11
Now I rejoice, not that you were made sorry, but that your sorrow led to repentance. For you were made sorry in a godly manner, that you might suffer loss from us in nothing. For godly sorrow produces repentance leading to salvation, not to be regretted; but the sorrow of the world produces death.
Acts 2:1-4
When the Day of Pentecost had fully come, they were all with one accord in one place. And suddenly there came a sound from heaven, as of a rushing mighty wind, and it filled the whole house where they were sitting. Then there appeared to them divided tongues, as of fire, and one sat upon each of them. And they were all filled with the Holy Spirit and began to speak with other tongues, as the Spirit gave them utterance.

Prayer:
O Lord, I want the power of the Spirit! I know it begins with repentance so I repent! I have gone under the water and up again to new and unending life in You. Now I want what John said You would bring—a baptism of fire! I realize how inadequate my gifts are to do the work You have called me to do. I need the Holy Ghost! Please do not leave me to my meager gifts and talents! Anoint me with Your power! Fill me with Your Spirit! “O Lord, send the power just now!” Amen.

1. They were in an upper chamber, They were all with one accord,
When the Holy Ghost descended As was promised by the Lord.

2. Yes, the pow’r from Heav’n descended With the sound of rushing wind;
Tongues of fire came down upon them, As the Lord said He would send.

3. Yes, this old-time pow’r was given To our fathers who were true;
This is promised to believers, And we all may have it too.