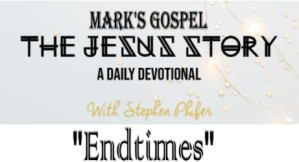 Next to the Temple area was the Mount of Olives. From such a height, one longs to see the future.
Jesus and the Twelve left the Temple, the quarreling leaders, and the blushing widow with the deep smile on her face and climbed to an observation point on the Mount of Olives. Without turning the head, the city could be seen in its completeness and the Temple rising to heaven as its centerpiece. A vision like this prompted pride in the past and hope for the future. One of the disciples commented on the solid construction of Herod’s Temple projecting permanence and a future of hope. Jesus let the comment rest on their minds as they completed the climb. When they reached the observation point, He directed their vision to the impressive sight below, but with a dire prophecy.

“Do you see these great buildings? Not one stone shall be left upon another,
that shall not be thrown down.”

What Will the Future Hold?
This was not at all what the men expected to hear. They expected Jesus to restore the spirituality of the Temple not bring down its buildings. None of them knew what to say so they let the matter drop. Later in a private setting with just Peter, James, and John, the inner circle, Jesus gave more details in response to their questions. They wanted to know when this would happen and what signs to look for.

Jesus told them such important things:

As terrible as these things will be the end will be yet to come.

The Ministry of the Spirit
Even in these terrible End-times, the Holy Spirit will be at work. He will fill the mouths of Christ-followers when they are on trial. To the end, they will speak as a witness that cannot be denied by courts or councils, kings or commoners. Families will be torn asunder by those who will not believe the truth. Believers will be hated and hunted, captured and killed for the sake of the Gospel.

Through it all, believers will have supernatural strength, strength to endure whatever may be hurled at them by a sinful, angry world. This strength of Spirit will carry the faithful through the trials, the torture, even the bloody tide of death to the other side of eternal life and peace.

The disciples were silent. There was nothing they could say. Some, perhaps, thought of turning back. Maybe following Jesus was all a mistake. Sitting there in the presence of the Lord as the shadow of the Mount of Olives crept over the city walls toward the Temple, the words of Jesus seemed unreal, impossible, unbelievable. Yet, if they were learning anything, they were learning to believe what Jesus said. Deeper than their thoughts and fears was a stirring in each man’s heart—Jesus had called them, selected them, to follow Him. That calling gripped each man and would not let Him go.

Scriptures:
Mark 13:1-13
Then as He went out of the temple, one of His disciples said to Him, “Teacher, see what manner of stones and what buildings are here!” And Jesus answered and said to him, “Do you see these great buildings? Not one stone shall be left upon another, that shall not be thrown down.” Now as He sat on the Mount of Olives opposite the temple, Peter, James, John, and Andrew asked Him privately, “Tell us, when will these things be? And what will be the sign when all these things will be fulfilled?” And Jesus, answering them, began to say: “Take heed that no one deceives you. For many will come in My name, saying, ‘I am He,’ and will deceive many. But when you hear of wars and rumors of wars, do not be troubled; for such things must happen, but the end is not yet. For nation will rise against nation, and kingdom against kingdom. And there will be earthquakes in various places, and there will be famines and troubles. These are the beginnings of sorrows. “But watch out for yourselves, for they will deliver you up to councils, and you will be beaten in the synagogues. You will be brought before rulers and kings for My sake, for a testimony to them. And the gospel must first be preached to all the nations. But when they arrest you and deliver you up, do not worry beforehand, or premeditate what you will speak. But whatever is given you in that hour, speak that; for it is not you who speak, but the Holy Spirit. Now brother will betray brother to death, and a father his child; and children will rise up against parents and cause them to be put to death. And you will be hated by all for My name’s sake. But he who endures to the end shall be saved.
Luke 21:28
Now when these things begin to happen, look up and lift up your heads, because your redemption draws near.”

Prayer:
Lord Jesus, Your return is near! All the signs You gave Your men are happening now in some part of the world. Be with my brothers and sisters in other lands who do not enjoy religious freedom. They serve You at the risk of their lives. Holy Spirit, give them the words to say that tell the Gospel story even as they go down to suffering and death, just as Jesus promised. We will not be distressed at the signs of the time for we see in them our final hope! Even so, Come, Lord Jesus! Amen.

1. Years of time have come and gone
Since I first heard it told
How Jesus would come again someday
If back then it seemed so real
Then I just can’t help but feel
How much closer His coming is today

Refrain:
Signs of the times are everywhere
There’s a brand new feeling in the air
Keep your eyes upon the eastern sky
Lift up your head redemption draweth nigh

2. Wars and strife on every hand
And violence fills the land
Still some people doubt He’ll ever come again
But the Word of God is true
He’ll redeem His chosen few
Don’t lose hope soon Christ Jesus will descend.