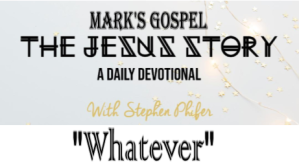 To follow Jesus is to live with the expectation of the supernatural.
Oh, yes, we live in the natural world like everyone else, subject to winds and temperature, seemingly random events both good and bad, natural laws like sowing and reaping, and the force of gravity. In addition to these natural phenomena, we live in the world of the spirit. Our spirits are host to the Holy Spirit of God! Angels, unseen, but powerful, attend our every move. Wicked spiritual forces oppose us and sometimes threaten our peace but we overcome them in the name of Jesus. They have no defense for this. Temptation to sin and displease the Lord is an ever present danger but with every temptation Jesus provides a way of escape. He gives us power over the enemy at every level of attack.

Supernatural Expectations
Jesus walked this earth in the power of the Spirit. He demonstrated an absolute mastery of spiritual things. This seems to be the category into which we must place the incident of the fig tree. Jesus knew that according to the natural seasons of the year, the poor tree would only have leaves and not figs. Yet, He expected a ripe fig to eat. When it was not forthcoming, He cursed the tree.

The next day, after the cleansing of the Temple, Jesus and the men came by the tree again. To their surprise the fig tree had dried up from the roots. It stood there, drooping in the sun, its brown leaves, so green and full the day before, were falling like tears to the dusty earth. Never would it bear fruit again. The disciples expressed their amazement:

“Rabbi, look! The fig tree which You cursed has withered away.”

He called them together positioning them so they could all learn a lesson from the fate of the fig tree.

“Have faith in God.”

For assuredly, I say to you, whoever says to this mountain, ‘Be removed and be cast into the sea,
and does not doubt in his heart, but believes that those things he says will be done, he will have whatever he says.

Their puzzled looks did not diminish as they sneaked looks from one to other to see if anyone was understanding what Jesus was saying. It was unanimous; no one got it.

“Therefore I say to you, whatever things you ask when you pray, believe that you receive them, and you will have them.”

Whatever things. There is no more inclusive word than whatever. Rolled under its broad canopy is the natural world and the supernatural realm. In the days ahead each of them would learn that the Lord would expect fruit from them, in season or out. They would produce! Weakness would not weaken them. Sickness would not stop them. Enemies would assault them to no avail. The Gospel would be preached to the whole world through them and those who followed them. How will this be possible? Because they would live lives of prayer.

To follow Jesus is to live with the expectation of the supernatural.

Scriptures:
Mark 11:20-26
Now in the morning, as they passed by, they saw the fig tree dried up from the roots. And Peter, remembering, said to Him, “Rabbi, look! The fig tree which You cursed has withered away.” So Jesus answered and said to them, For assuredly, I say to you, whoever says to this mountain, ‘Be removed and be cast into the sea,’ and does not doubt in his heart, but believes that those things he says will be done, he will have whatever he says. Therefore I say to you, whatever things you ask when you pray, believe that you receive them, and you will have them. “And whenever you stand praying, if you have anything against anyone, forgive him, that your Father in heaven may also forgive you your trespasses. But if you do not forgive, neither will your Father in heaven forgive your trespasses.”
2 Timothy 4:1-5 NKJV
I charge you therefore before God and the Lord Jesus Christ, who will judge the living and the dead at His appearing and His kingdom: Preach the word! Be ready in season and out of season. Convince, rebuke, exhort, with all longsuffering and teaching. For the time will come when they will not endure sound doctrine, but according to their own desires, because they have itching ears, they will heap up for themselves teachers; and they will turn their ears away from the truth, and be turned aside to fables. But you be watchful in all things, endure afflictions, do the work of an evangelist, fulfill your ministry.

Prayer:
Lord Jesus, You have called me to a supernatural life in this natural world. You are Lord of all, including all the elements and forces in the spirit world. Help me see myself in the fig tree. I know You have called me to a productive life in season and out of season. My only hope of success is the flow of Your supernatural power. When You call on me, help me to always have something to present to You—whatever You demand from me! For Your glory, Lord! Amen.

1. Encamped along the hills of light, Ye Christian soldiers rise,
And press the battle ere the night Shall veil the glowing skies;
Against the foe in vales below Let all our strength be hurled;
Faith is the victory, we know, That overcomes the world.

2. His banner over us is love, Our sword the Word of God;
We tread the road the saints before With shouts of triumph trod.
By faith, they like a whirlwind’s breath, Swept on o’er every field;
The faith by which they conquered death Is still our shining shield.

3. On every hand the foe we find Drawn up in dread array;
Let tents of ease be left behind, And onward to the fray.
Salvation’s helmet on each head, With truth all girt about,
The earth shall tremble ’neath our tread And echo with our shout.

4. To him that overcomes the foe White raiment shall be giv’n;
Before the angels he shall know His name confessed in heav’n;
Then onward from the hills of light, Our hearts with love aflame,
We’ll vanquish all the hosts of night, In Jesus’ conqu’ring name.