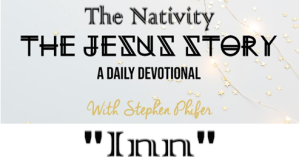 All they needed was accommodations—a room for the night.
With seven words, Dr. Luke introduces a most fruitful image into the Christmas story: “…there was no room for them in the inn.” This bit of history has birthed so much fiction:

It is the firm conviction of this writer that these sketchy histories exist precisely for the purpose of firing our imaginations. As we fill in the missing details, the story becomes more real to us.

So there was an inn in Bethlehem.
The end of the torturous journey for a young woman “great with child” was a first century version of a No Vacancy sign. There was a stable out back where beasts of burden rested tired limbs and aching backs. It would have to do for an exhausted Joseph and a sore, weary Mary. No one knew better than she that her time was near.

Joseph, the planner, the builder, the careful, caring husband did his best to make his wife comfortable. It was a losing cause. Her discomfort was beyond the reach of his skills and the possibilities of the primitive conditions. She did not blame him, of course. None of it was his fault. It was part of the blessing for which they had been chosen. Joseph had prepared for this moment by listening to the advice of his mother and Mary’s. Knowing this, he and Mary waited. He fed and watered the donkey.

They were ready.
The extra blankets they had brought along were put to good use, propping Mary up and shielding off the chill of night. None of the guests at the inn knew about them or cared. The innkeeper did not visit to check on them. He was too busy with his paying guests to worry about this unfortunate couple. The animals were quiet and the wind stopped at the frail door to the stable. They were so alone.

But they were not alone.
Unseen by them, angels stood at every corner of the stable. Each heavenly guard stood at an unusual alert. This was no routine assignment. Angels knew of the miracle that escaped the notice of the people at the inn. The One Who Sits on the Throne had somehow abandoned glory for this humble inn and its barn. He was soon to be born. The mystery of human life that fascinated angels was about to unfold before them—birth!—new life! An infant, helpless but full of potential, would enter the world. The clock of mortality would start ticking for the little one, measuring a life fading even as it begins.

As the pains become sharper and more frequent, Mary held Joseph’s hand. Together they grew strength with each whisper of the name, “Jesus.”

Luke 2:1-7 KJV
And it came to pass in those days, that there went out a decree from Caesar Augustus, that all the world should be taxed. (And this taxing was first made when Cyrenius was governor of Syria.) And all went to be taxed, every one into his own city. And Joseph also went up from Galilee, out of the city of Nazareth, into Judaea, unto the city of David, which is called Bethlehem; (because he was of the house and lineage of David:) To be taxed with Mary his espoused wife, being great with child. And so it was, that, while they were there, the days were accomplished that she should be delivered. And she brought forth her firstborn son, and wrapped him in swaddling clothes, and laid him in a manger; because there was no room for them in the inn.

Prayer:
Lord Jesus, Bethlehem was prophesied; the back room of an inn was a surprise. The joy of Your birth is clothed in irony and pain. Christmas today retains this uneasy duet of hope and sadness. We rejoice in the songs of the season and think deeply of those we have lost who in Christmases past rejoiced with us. It is a time of having and losing, of smiles and tears, of singing hope and uneasy doubt. Lord, help me adjust to the situation the way it is and find the comfort You provide. Assure me that angels are ever on guard and that Your name is the most powerful prayer I can pray. Jesus! Amen.

1 What Child is this, who, laid to rest,
On Mary’s lap is sleeping?
Whom angels greet with anthems sweet,
While shepherds watch are keeping?

Refrain:
This, this is Christ, the King,
Whom shepherds guard and angels sing:
Haste, haste to bring Him laud,
The Babe, the Son of Mary!

2 Why lies He in such mean estate,
Where ox and ass are feeding?
Good Christian, fear: for sinners here
The silent Word is pleading.

3 So bring Him incense, gold, and myrrh,
Come, peasant, king to own Him.
The King of kings salvation brings;
Let loving hearts enthrone Him.