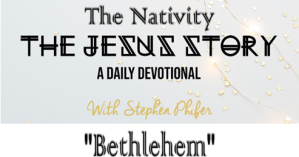 As old as religion itself is the concept of “sacred space.”
The Old Covenant was permeated with the idea of places where God would meet with people who reached out to Him. The patriarchs built their altars of sacrifice and God met with them there. The Tabernacle in the Wilderness was a movable space, no less sacred for its portability. God’s presence was manifested there. When the singers and players made “one sound” to praise and honor the Lord, King Solomon’s splendid Temple was saturated by a cloud of God’s glory. The glory was so thick the priests could not stand up to perform their duties. This was the pinnacle of sacred space and would remain so until certain events would unfold in the vicinity of place called Bethlehem.

The City of David
Bethlehem was called the City of David. He was born there and anointed to be king there. The fields near Bethlehem were his fields before they were occupied by shepherds when Jesus was born. In them he killed the lion and the bear in preparation for his battle with Goliath. He never lost his love for Bethlehem. When King Saul pursued him and David was hiding in a cave, he remembered the sweet waters from a well in Bethlehem. His men risked their lives to bring him some. Later Ruth and Boaz would meet in the fields near Bethlehem to continue the Line of David which would eventually include both Mary and Joseph. When Rome called for a census Mary and Joseph had to make the journey to Bethlehem.

Big things happen in small places.
After the days of Ruth and Boaz, Bethlehem fell into a well-deserved obscurity. The Prophet Micah, however, exalts the little town to the pinnacle of prophetic importance.

Micah 5:2-5
But you, Bethlehem Ephrathah, Though you are little among the thousands of Judah,
Yet out of you shall come forth to Me the One to be Ruler in Israel,
Whose goings forth are from of old, from everlasting.”

This little town, these peaceful pastures and fruitful fields, will be the birthplace of Messiah, King of kings, Lord of lords. This town whose name means “house of bread” will produce the One who is called the Bread of Life, David’s Royal Son.

Places of Worship Today
Just as Jehovah met with Abraham and the other patriarchs at their altars of sacrifice, the Lord meets with people today when they gather in the name of Jesus. Our praise makes that place a sacred space. Just as the glory of the Lord rested on the Tabernacles of David and Moses and filled the Temple of Solomon, we can know the Shekinah of God when we call upon His name in truth. In small numbers or large, the Lord inhabits and is enthroned upon the praises of His people.

Scriptures:
Micah 5:2 NKJV
But you, Bethlehem Ephrathah, Though you are little among the thousands of Judah, Yet out of you shall come forth to Me The One to be Ruler in Israel, Whose goings forth are from of old,
From everlasting.”
Matthew 2:5-8 NKJV
So they said to him, “In Bethlehem of Judea, for thus it is written by the prophet: ‘But you, Bethlehem, in the land of Judah, Are not the least among the rulers of Judah; For out of you shall come a Ruler Who will shepherd My people Israel.'” Then Herod, when he had secretly called the wise men, determined from them what time the star appeared. And he sent them to Bethlehem and said, “Go and search carefully for the young Child, and when you have found Him, bring back word to me, that I may come and worship Him also.”
1 Samuel 16:1-5 NKJV
Now the Lord said to Samuel, “How long will you mourn for Saul, seeing I have rejected him from reigning over Israel? Fill your horn with oil, and go; I am sending you to Jesse the Bethlehemite. For I have provided Myself a king among his sons.” And Samuel said, “How can I go? If Saul hears it, he will kill me.” But the Lord said, “Take a heifer with you, and say, ‘I have come to sacrifice to the Lord .’ Then invite Jesse to the sacrifice, and I will show you what you shall do; you shall anoint for Me the one I name to you.” So Samuel did what the Lord said, and went to Bethlehem. And the elders of the town trembled at his coming, and said, “Do you come peaceably?” And he said, “Peaceably; I have come to sacrifice to the Lord. Sanctify yourselves, and come with me to the sacrifice.” Then he consecrated Jesse and his sons, and invited them to the sacrifice.
2 Samuel 23:13-17 NKJV
Then three of the thirty chief men went down at harvest time and came to David at the cave of Adullam. And the troop of Philistines encamped in the Valley of Rephaim. David was then in the stronghold, and the garrison of the Philistines was then in Bethlehem. And David said with longing, “Oh, that someone would give me a drink of the water from the well of Bethlehem, which is by the gate!” So the three mighty men broke through the camp of the Philistines, drew water from the well of Bethlehem that was by the gate, and took it and brought it to David. Nevertheless he would not drink it, but poured it out to the Lord. And he said, “Far be it from me, O Lord , that I should do this! Is this not the blood of the men who went in jeopardy of their lives?” Therefore he would not drink it. These things were done by the three mighty men.
1 Corinthians 1:26-31 NKJV
For you see your calling, brethren, that not many wise according to the flesh, not many mighty, not many noble, are called. But God has chosen the foolish things of the world to put to shame the wise, and God has chosen the weak things of the world to put to shame the things which are mighty; and the base things of the world and the things which are despised God has chosen, and the things which are not, to bring to nothing the things that are, that no flesh should glory in His presence. But of Him you are in Christ Jesus, who became for us wisdom from God — and righteousness and sanctification and redemption — that, as it is written, “He who glories, let him glory in the Lord.”
Psalm 22:3 KJV/NKJV
But thou art holy, O thou that inhabitest the praises of Israel.
But You are holy, Enthroned in the praises of Israel.
Matthew 18:20 NKJV
For where two or three are gathered together in My name, I am there in the midst of them.”

Prayer:
Lord Jesus, just as you blessed little Bethlehem with Your entrance into this world, You have blessed my heart with Your entrance there. Now, miracle of miracles, my heart is sacred space. Manifest Your glory there. Let me join the songs of angels today in worship as they sing before Your throne. “Holy, holy, holy is the Lord God Almighty! The whole earth is full of His glory. Holy, holy, holy is the Lord God Almighty who was and is and is to come!” I gather with the saints in Your holy name to feast on the Bread of Life and drink from the Living Waters. Alleluia. Alleluia. Amen.

1. O little town of Bethlehem, how still we see thee lie!
Above thy deep and dreamless sleep  the silent stars go by.
Yet in thy dark streets shineth  the everlasting light;
the hopes and fears of all the years are met in thee tonight.

2. For Christ is born of Mary and, gathered all above,
while mortals sleep, the angels keep their watch of wond’ring love.
O morning stars, together proclaim the holy birth,
and praises sing to God the King, and peace to men on earth.

3. How silently, how silently the wondrous gift is giv’n!
So God imparts to human hearts the blessings of His heav’n.
No ear may hear His coming, but in this world of sin,
where meek souls will receive Him still the dear Christ enters in.