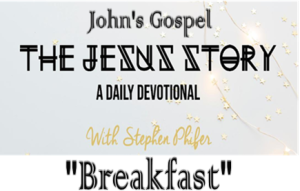 Two miraculous appearances of Jesus to the assembled disciples share this factor: We do not know how they ended.
It is safe to assume that Jesus simply disappeared as suddenly as He had appeared. If so, a sweetness in the room must have remained. The words He spoke to His gathered followers must have stayed with them after He left. There was no announced schedule indicating when He would return. All they could do was wait and speculate on what it all meant. What was next? They remembered His announced intention to leave them. Had that already happened? If so, could they rehearse all the things He had told them and mold them into some sort of action plan? Mary had told them that Jesus said to go to Galilee where He had found most of them and He would appear to them. This is what they decided to do.

Fishing
The sight, smells, and sounds of the sea were too much for the fishermen among them. Peter, as per the well-established pattern, spoke what the others were thinking,

“I am going fishing.”

They all agreed it was the thing to do. A boat was handy so they boarded her and began a fruitless night of fishing. The fish were somewhere else but still it felt good to be back at the old job even with nothing to show for it. The night blossomed into the early morning as the sun inched over the horizon but all they had was blistered hands and sore backs.

A Stranger on the Shore
As they pulled for land, a figure waved to them from the beach. At that distance, they did not recognize the Lord. He called to them.

“Children, have you any food?”

Their negative report brought a surprising bit of instruction.

“Cast the net on the right side of the boat, and you will find some.”

To some a sense of deja vu stole over them. This had happened before, hadn’t it? At any rate they obeyed, casting on the right side of the boat, something they had done repeatedly without result. This time it was different. Immediately the net started filling and was soon to the danger point with the men straining to hold it and propel the boat to shore.

John, also experiencing deja vu, realized the identity of the stranger and told Peter it was Jesus. Peter could not wait for safe passage. He plunged into the sea and started for his Jesus; things were not settled between them.

The men brought the boat and the catch—153 large fish!—to shore and found a fire with fish already frying and bread on the side. Jesus invited them,

Their weariness forgotten, their joy returned, they consumed the meal Jesus had prepared for them.

A Meal for Us
It is not a breakfast, but Jesus has prepared a meal for us. We call it the Lord’s Supper. Like all meals shared by family and friends this one is a time of bonding in sweet fellowship. It is a renewal of the Covenant we share. It is a thanksgiving for past blessings and an anticipation of great things to come. We gather at His table because He has invited us to “Come and dine.”

Scriptures:
John 21:1-14
After these things Jesus showed Himself again to the disciples at the Sea of Tiberias, and in this way He showed Himself: Simon Peter, Thomas called the Twin, Nathanael of Cana in Galilee, the sons of Zebedee, and two others of His disciples were together. Simon Peter said to them, “I am going fishing.” They said to him, “We are going with you also.” They went out and immediately got into the boat, and that night they caught nothing. But when the morning had now come, Jesus stood on the shore; yet the disciples did not know that it was Jesus. Then Jesus said to them, “Children, have you any food?” They answered Him, “No.” And He said to them, “Cast the net on the right side of the boat, and you will find some.” So they cast, and now they were not able to draw it in because of the multitude of fish. Therefore that disciple whom Jesus loved said to Peter, “It is the Lord!” Now when Simon Peter heard that it was the Lord, he put on his outer garment (for he had removed it), and plunged into the sea. But the other disciples came in the little boat (for they were not far from land, but about two hundred cubits), dragging the net with fish. Then, as soon as they had come to land, they saw a fire of coals there, and fish laid on it, and bread. Jesus said to them, “Bring some of the fish which you have just caught.” Simon Peter went up and dragged the net to land, full of large fish, one hundred and fifty-three; and although there were so many, the net was not broken. Jesus said to them, “Come and eat breakfast.” Yet none of the disciples dared ask Him, “Who are You?” — knowing that it was the Lord. Jesus then came and took the bread and gave it to them, and likewise the fish. This is now the third time Jesus showed Himself to His disciples after He was raised from the dead.
Luke 5:3-6 KJV
And he entered into one of the ships, which was Simon’s, and prayed him that he would thrust out a little from the land. And he sat down, and taught the people out of the ship. Now when he had left speaking, he said unto Simon, Launch out into the deep, and let down your nets for a draught. And Simon answering said unto him, Master, we have toiled all the night, and have taken nothing: nevertheless at thy word I will let down the net. And when they had this done, they inclosed a great multitude of fishes: and their net brake.

Prayer:
Lord Jesus, I marvel at Your invitation! As the Psalmist said, “You prepare a table for me…” even in the presence of my enemies and certainly in the presence of my friends and family. Your Word itself is a feast! Food and drink like manna from heaven, sourced in another world to give strength to those of us in this present world. Joyful new wine is at this table, Your life outpoured for us and then poured into us. There is living water at this feast. To drink it is to know in our hearts that we need never thirst for any other. I will feast today at Your Table. Thank You, Lord. Amen.

1. Jesus has a table spread where the saints of God are fed.
He invites His chosen people, “Come and dine.”
With His manna He doth feed and supplies our every need.
Oh ‘tis sweet to sup with Jesus all the time.

2. The disciples came to land, thus obeying Christ’s command,
For the Master called to them, “O come and dine;”
There they found their heart’s desire, bread and fish upon the fire;
Thus He satisfies the hungry ev’ry time.

3. Soon the Lamb will take His Bride to be every at His side,
All the hosts of heaven will assembled be;
O ‘twill be a glorious sight, all the saints in spotless white;
And with Jesus they will feast eternally.