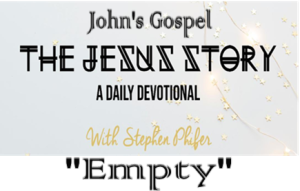 The world has never been as empty as it was that weekend.
The disciples congregated in small groups with nothing to say to each other. Brief attempts at conversation all ended in mumbled apologies or sudden silences. There was nothing to be said. They didn’t accuse each other—they had all failed Jesus and felt like cowards. Peter was the worst among them. He didn’t want to be there and wore his silent shame like sackcloth. As much as he hated being there, he could not be anywhere else. Each man was trying to figure out what to do next. Go back home? They had families and lives which they had suddenly left to follow Jesus. Follow Him to what? This?—Enemies of Rome and the Temple? What would they do now?

The women also met together but they did not meet in shared silence like the men. They wept together and remembered. His mother was the leader, it seemed, and she had been storing up memories in her heart since the beginning. The other women listened enraptured to her stories of angels and shepherds and foreign kings bearing gifts and those two strange elderly people in the Temple. Somehow, in their grief they found solace in these histories. Mary and Martha of Bethany told of their adventure with their brother Lazarus. Mary Magdalene was hesitant to speak of her life before Jesus removed seven demons from her ruined soul. Every time she tried to tell the story she dissolved into tears. All of the other women understood and joined her.

The Morning of the First Day
Before dawn on the first day of the week, Mary Magdalene could wait no longer. The same full moon that lit Gethsemane led her to the tomb. Those Pharisees, Nicodemus and Joseph, told them the location of the tomb in a garden used by the wealthy. It was no matter. She had to do go there. No one could stop her.

Approaching the tomb in the blue-green moonlight, she could tell that something was wrong. The ground was littered with the equipment of soldiers as if they had left in a great hurry. Shadows covered the impressive tomb. The moon emerged from behind a cloud and the sky brightened just enough for Mary to see that the huge stone had been rolled away. Instead of looking inside she ran, right into the path of Simon Peter and John. Breathless, she reported to them what she had seen,

“They have taken away the Lord out of the tomb,
and we do not know where they have laid Him.”

Peter and John exchanged glances and without a word started running toward the tomb. Mary followed behind them. John, being younger, arrived first and, swallowing hard, stooped down and peered into the darkness of the tomb. When his eyes adjusted to the lack of light, he saw the linen cloths lying on the stone slab where the body had been. Simon Peter arrived and carefully entered the tomb. He also saw the linen grave cloths and, oddly enough, the handkerchief that had been wrapped around Jesus’ head lying in a separate place, neatly folded. As Peter tried to understand what he saw, John entered the tomb. When he observed these things, faith filled his heart.

No Place to Go but Home
According to John’s narrative, they went home, leaving Mary Magdalene standing by the empty tomb. John explains the reason; they did not yet know the scriptural prophesy that Jesus would rise from the dead. The tomb was empty but their hearts were not yet full.

Do we really hear the Lord?
Jesus had told them all many times that He must die and then be raised to new life. Did they really hear Him? Do we?

Scriptures:
John 20:1-10
Now the first day of the week Mary Magdalene went to the tomb early, while it was still dark, and saw that the stone had been taken away from the tomb. Then she ran and came to Simon Peter, and to the other disciple, whom Jesus loved, and said to them, “They have taken away the Lord out of the tomb, and we do not know where they have laid Him.” Peter therefore went out, and the other disciple, and were going to the tomb. So they both ran together, and the other disciple outran Peter and came to the tomb first. And he, stooping down and looking in, saw the linen cloths lying there; yet he did not go in. Then Simon Peter came, following him, and went into the tomb; and he saw the linen cloths lying there, and the handkerchief that had been around His head, not lying with the linen cloths, but folded together in a place by itself. Then the other disciple, who came to the tomb first, went in also; and he saw and believed. For as yet they did not know the Scripture, that He must rise again from the dead. Then the disciples went away again to their own homes.

Prayer:
Lord Jesus, I know there are things You have said to me in Your Word that have never penetrated my heart. When the situation arises and I need that Word from You, I act as if I had never heard Your voice. Forgive me, Lord. Help me to really listen and believe what You have said. When I read something in the Bible that I do not understand, help me believe it anyway, trusting to Your Spirit to bring it home to me when the time comes for it. Many things You have promised have yet to happen. Help me believe and keep on believing. Amen.