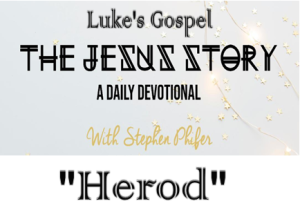 Herod Antipas, the son of Herod the Great, the murderer of the innocents in Bethlehem, had not a drop of Jewish blood in him.
Yet he propagated his father’s lie that maintained a claim to a Jewish heritage. In truth he was “half Idumaean, half Samaritan.” (International Standard Bible Encyclopedia) He used the outward trappings of the Jewish faith to keep the peace of Jerusalem but operated from a heart of lust and privilege. His proximity to the Jewish religion created in him a fascination for men of spiritual power. He imprisoned John the Baptist but had to be tricked into killing him. His insatiable lusts cost the prophet his head. Now there was this prophet named Jesus. Herod was excited to meet Him.

A Galilean
When the elders testified that Jesus was from Galilee, this provided Pilate with a way out of this unpleasant business. Galilee was the responsibility of King Herod. Pilate sent the elders and their captive to the king.

King Herod was thrilled at the prospect of meeting Jesus, thinking perhaps he would be entertained by a miracle. There were so many stories of fantastic deeds done by this man. There was also a lot of mumbo jumbo about the Jewish Messiah, but what serious Politian paid any mind to such foolishness? Herod had observed his father’s fear of the “King of the Jews.” There was something there to be feared, something powerful, something latent but threatening. Herod thought it wise and certainly fascinating to study these prophets and potential “Messiahs.”

Before King Herod Antipas
When Jesus was deposited before the king, he looked nothing like a prophet or a king and certainly not a Messiah. He was bruised and beaten by the Temple guards and chained at His hands and feet. His fine one-piece outer garment was filthy from the dust of the street and of the floor of the High Priest’s house. Herod looked Jesus over for some time, trying to make sense of this. Perhaps, there was power in His speech. It was reported that demons and storms obeyed the sound of His voice. Herod set about asking questions, many questions.

The Silent Lamb
Jesus refused to converse with the king. With each unanswered question, Herod’s anger multiplied in force. The elders, despising King Herod as a Roman puppet pretending to be a Jew, finally had to add their questions to the inquest. Still, Jesus did not answer. His silence united these enemies into a single cause—destroy this man, Jesus!

Another Robe
This exercise before King Herod was getting nowhere. The refusal of Jesus to answer the charges against Him seemed to short-circuit the legal system. When debate is impossible and testimony is not forthcoming, violence and ridicule become the methods.

Herod called for the Roman guards protecting the palace. These were armed men of great strength, usually engaged to restrain a dangerous criminal. This time, all they had to handle was a beaten down homeless man in chains. They started with verbal abuse, seeking to break His spirit. If he claimed to be a king, they would revile Him as one, mocking Him with false tributes. They stripped Him of His seamless robe and put a purple robe on Him. From other sources we learn that they wove a crown of thorns and pressed it into His scalp. Frustrated, King Herod sent Jesus back to Pilate.

An Odd Friendship Begins
Dr. Luke adds an intriguing detail. Prior to the trials of Jesus, Pilate and Herod had been rivals, each suspecting the other. The case of Jesus somehow made them friends.

Scriptures:
Luke:23:6-12 NKJV
When Pilate heard of Galilee, he asked if the Man were a Galilean. And as soon as he knew that He belonged to Herod’s jurisdiction, he sent Him to Herod, who was also in Jerusalem at that time. Now when Herod saw Jesus, he was exceedingly glad; for he had desired for a long time to see Him, because he had heard many things about Him, and he hoped to see some miracle done by Him. Then he questioned Him with many words, but He answered him nothing. And the chief priests and scribes stood and vehemently accused Him. Then Herod, with his men of war, treated Him with contempt and mocked Him, arrayed Him in a gorgeous robe, and sent Him back to Pilate. That very day Pilate and Herod became friends with each other, for previously they had been at enmity with each other.
Isaiah 53:7 NKJV
He was oppressed and He was afflicted, Yet He opened not His mouth; He was led as a lamb to the slaughter, And as a sheep before its shearers is silent, So He opened not His mouth.

Prayer:
Lord Jesus, Your courage is so amazing. You took the open-palm blows of the Temple guards. You endured the mocking abuse of the Roman soldiers. You wore chains on Your hands and feet like jewelry, knowing You could call on angels to break them at anytime. You wore a crown of pain and a mocking purple robe. You stood before Herod as silent, Isaiah says, as a lamb before those who would shear it. Angels stood by weeping, straining angel muscles to intervene but never making a move. Why? Because You love me and the world, and You hated what sin had done to us. This was the only way to defeat the forces that had defeated us. Your courage is so amazing! Thank You, Lord Jesus!

1. They bound the hands of Jesus in the garden where He prayed
They led Him through the streets in shame
They spat upon the Savior so pure and free from sin
They said crucify Him He’s to blame

2. Upon His precious head they placed a crown of thorns
They laughed and said behold the king
They struck Him and they cursed Him and mocked His holy name
And all alone He suffered everything