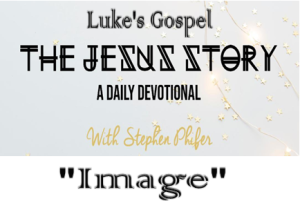 The scribes and Pharisees had Jesus under 24 hour surveillance.
They tried every device they could think of to catch Jesus in His words. He was teaching in the Temple courts every day and the authorities were watching.

And still He eluded them.

A “can’t-miss-scheme” misses and by a large margin.
A few of the leaders pretended to be converts to His message. They came to Him with flattery soaked in venom.

“Teacher, we know that You say and teach rightly, and You do not show personal favoritism, but teach the way of God in truth: Is it lawful for us to pay taxes to Caesar or not?”

Jesus stopped to look at them and a staring contest began. He wasn’t fooled by their flattery. He locked eyes with the spokesman and burned a hole in his act. After a terrible moment of unequal eye-to-eye combat, the man dropped his eyes to the ground beneath him. Jesus looked at his chief lieutenant next to him who surrendered in even less time. One by one, Jesus stared down each hypocrite as the crowd waited to hear how He would answer. He blew the lid off their charade.

“Why do you test Me?

It was an excellent question. They had never bested Him in any argument. He always won these little debates. Yet, there they were, trying one more time. How would He deal with them?

“Show Me a denarius.”

Of course, a leader of the people would never admit to carrying money so he had to signal a servant to bring him a coin. Thus supplied, he tossed the coin to Jesus. Jesus made a great catch and held the coin up for all to see.

“Whose image and inscription does it have?”

As with so many of Jesus’ questions, there was only one answer. The leaders were silent, not wishing to fall into another trap. The servant who brought the coin knew the answer and yelled out,

He thought he would be rewarded for having the right answer but the stern look from his Pharisee-boss told a different tale. Jesus tossed the coin back at His questioner who missed it, letting it fall to the pavement. The hapless the servant saw his duty and bent to retrieve it only to be clouted by the Pharisee. Jesus closed the issue with a principle for the ages.

The Power of the Image
The Pharisees were outsmarted again and we are made aware of the importance of images:

The people of God live in the real world of governments, laws, and civic responsibilities. While we are citizens of a higher Kingdom and bear the image of God in our very lives, we must still render unto the government its due. The church needs an orderly and fair society to do her godly work. As long as the laws do not prescribe disobedience to God’s laws, we must obey and do so to the glory of God.

Scriptures:
Luke:20:20-26 NKJV
So they watched Him, and sent spies who pretended to be righteous, that they might seize on His words, in order to deliver Him to the power and the authority of the governor. Then they asked Him, saying, “Teacher, we know that You say and teach rightly, and You do not show personal favoritism, but teach the way of God in truth: Is it lawful for us to pay taxes to Caesar or not?” But He perceived their craftiness, and said to them, “Why do you test Me? Show Me a denarius. Whose image and inscription does it have?” They answered and said, “Caesar’s.” And He said to them, “Render therefore to Caesar the things that are Caesar’s, and to God the things that are God’s.” But they could not catch Him in His words in the presence of the people. And they marveled at His answer and kept silent.
Romans 13:1-7 NKJV
Let every soul be subject to the governing authorities. For there is no authority except from God, and the authorities that exist are appointed by God. Therefore whoever resists the authority resists the ordinance of God, and those who resist will bring judgment on themselves. For rulers are not a terror to good works, but to evil. Do you want to be unafraid of the authority? Do what is good, and you will have praise from the same. For he is God’s minister to you for good. But if you do evil, be afraid; for he does not bear the sword in vain; for he is God’s minister, an avenger to execute wrath on him who practices evil. Therefore you must be subject, not only because of wrath but also for conscience’ sake. For because of this you also pay taxes, for they are God’s ministers attending continually to this very thing. Render therefore to all their due: taxes to whom taxes are due, customs to whom customs, fear to whom fear, honor to whom honor.

Prayer:
Lord Jesus, it so amazing that I am made in the image of God—and so challenging. You are the Creator, so You made me creative. You are loving, so You gave people the ability to give and receive love. You are truth, so gave each of us a deep desire to know the truth of things. You have high and blessed purpose, so You installed in each of us the desire to be significant, to live significant lives, to make a difference in this world. Lord, help me live up to the image stamped on my heart—Your image, O God! Wonder of wonders! Alleluia!

1. Oh! to be like Thee, blessed Redeemer,
This is my constant longing and prayer;
Gladly I’ll forfeit all of earth’s treasures,
Jesus, Thy perfect likeness to wear.

2. Oh! to be like Thee, full of compassion,
Loving, forgiving, tender and kind,
Helping the helpless, cheering the fainting,
Seeking the wand’ring sinner to find.

Refrain
3. Oh! to be like Thee, lowly in spirit,
Holy and harmless, patient and brave;
Meekly enduring cruel reproaches,
Willing to suffer, others to save.

4. Oh! to be like Thee, Lord, I am coming,
Now to receive th’ anointing divine;
All that I am and have I am bringing,
Lord, from this moment all shall be Thine.

5. Oh! to be like Thee, while I am pleading,
Pour out Thy Spirit, fill with Thy love,
Make me a temple meet for Thy dwelling,
Fit me for life and Heaven above.