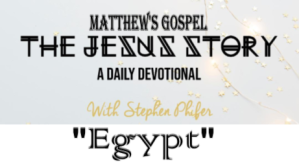 The Jesus Story contains one of the strangest and most unlikely of prophecies: “Out of Egypt I called My Son.”
Naming the tiny town of Bethlehem as the birthplace of Messiah was odd enough, but to name Egypt as a source for Messiah is odd beyond belief and yet it happened. This story is laden with these amazing incidences of fulfilled prophecy. One of Matthew’s purposes in writing his version of the life of Christ is to point these things out to his Jewish readers. Jesus was a Jew and He was the Jewish Messiah as well as the Savior of the World. Matthew’s account springs from a deep love for God’s Chosen People.

Not the First Time
This was not the first call “out of Egypt” in the plan of God to save the world. Before there could be a Jewish Messiah to save the world, there had to be a Jewish nation. God called Abraham out of his homeland to find a new one and found the Hebrew nation. Generations later, famine drove the children of Israel (Jacob, Abraham’s heir) into Egypt for survival. Safety became slavery when Egyptian leaders came to power who did not know Joseph. Through the stammering lips of Moses, God called His Chosen People out of Egypt. With a mighty hand deliverance was won. It took a generation of faithless wandering in the wilderness for the nation to finally return to the Promised Land. In that wilderness the people learned how to worship God. They learned the laws of the Covenant which would guide them in their re-won homeland. Though they found the land full of enemies, when their worship was right, God’s hand, the same mighty hand that called them out of Egypt, was with them to subdue the land promised to them.

The Lessons of Egypt
Former Egyptian slaves became landowners and craftsmen, people of creativity and commerce. Realize this, the Hebrews went into Egypt a nation of herdsmen. They were called out of Egypt as a nation of craftsman. Craftsmanship has been a mark of God’s people ever since. Work is holy and is another form of worship honoring God. The wonderful Tabernacle they built in the wilderness was manufactured with this formula:

This is still the formula for Christian living today:

With this three-fold blessing, we are called out of the world to minister to the world.

The Holy Family in Egypt
Matthew gives us no details of how long Joseph, Mary, and Jesus stayed in Egypt or what they did while there. No purpose is served if we speculate on these things. The immediate cause was the hostility of King Herod. It was imperative to remove Jesus from the reach of the wicked king. Upon news of his death, they returned to Israel. How ironic that God would use a heathen nation to protect His Son from the King of Israel. Once again, “Out of Egypt…”

Scriptures:
Matthew 2:13-15
Now when they had departed, behold, an angel of the Lord appeared to Joseph in a dream, saying, “Arise, take the young Child and His mother, flee to Egypt, and stay there until I bring you word; for Herod will seek the young Child to destroy Him.” When he arose, he took the young Child and His mother by night and departed for Egypt, and was there until the death of Herod, that it might be fulfilled which was spoken by the Lord through the prophet, saying, “Out of Egypt I called My Son.”
Hosea 11:1
“When Israel was a child, I loved him, And out of Egypt I called My son.”

Prayer:
Lord Jesus, You came so far to find us and redeem us. And when You came to this earth, You were in immediate danger. King Herod was the first but he was not the last to seek Your life. Through it all, You were protected, even by a journey to Egypt, the very symbol of sin. You were, indeed, as the Scripture predicted called out of Egypt. In the end, no one was able to take Your life; You gave it willingly for our sake, for my sake. Then, You were called out of the tomb. Next, You were called out of this world to regain the throne of Heaven. Soon, You will call us out of this world, this Egypt, to be with You forever. Amen and Amen!

1. Thou didst leave Thy throne and Thy kingly crown,
When Thou camest to earth for me;
But in Bethlehem’s home was there found no room
For Thy holy nativity.
O come to my heart, Lord Jesus,
There is room in my heart for Thee.

2. Heaven’s arches rang when the angels sang,
Proclaiming Thy royal degree;
But of lowly birth didst Thou come to earth,
And in great humility.
O come to my heart, Lord Jesus,
There is room in my heart for Thee.

3. The foxes found rest, and the birds their nest
In the shade of the forest tree;
But Thy couch was the sod, O Thou Son of God,
In the deserts of Galilee.
O come to my heart, Lord Jesus,
There is room in my heart for Thee.

4. Thou camest, O Lord, with the living word
That should set Thy people free;
But with mocking scorn, and with crown of thorn,
They bore Thee to Calvary.
O come to my heart, Lord Jesus,
There is room in my heart for Thee.

5. When the heavens shall ring, and the angels sing,
At Thy coming to victory,
Let Thy voice call me home, saying “Yet there is room,
There is room at My side for thee.”
My heart shall rejoice, Lord Jesus,
When Thou comest and callest for me.