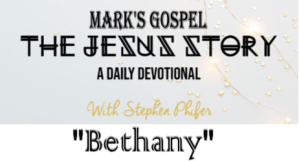 We must minister to the Lord if we are to minister to the world.
After the rigorous events in Temple and teachings He gave the men, Jesus was tired. He retreated to one of the few places on earth where He was made welcome, Bethany, the home of Martha, Mary, and Lazarus. Most of what we know about these sisters and their brother comes from other accounts so we will not treat them here. This particular dinner was at the home of a former leper named Simon. It is likely that Martha and Mary helped Simon put the dinner together. Lepers were not known for social graces.

A Plot Brews in Jerusalem.
The defeated leaders of the people in Jerusalem were hatching another plot against Jesus. He was not concerned. He was beyond their trickery. As they were about to proceed, the brightest among them realized that it was near the time of the Passover, not a good time for a political ploy. They decided to wait for a more opportune time.

A Celebration of Joy
It is easy to imagine that this dinner at the home of Simon, a former leper, was a joyous celebration. Add to the healing of Simon the celebration of the resurrection of Lazarus and you have the makings for quite a party. Martha hurried here and there in the unfamiliar, dreadfully ill-equipped kitchen working her hospitality magic just as if she were home in her own well-designed kitchen.

Mary was there, too, in her customary place at the feet of Jesus. She had prepared for this scene by secretly bringing a gift for Jesus, her most valued possession, a flask of expensive ointment. She was oblivious to the noise of laughter and of fellowship. Her focus was on Jesus. She was waiting for the right moment—not a moment for others, but a moment just for her and Her Lord.

The Alabaster Flask
The moment came and she knew it. There was no change in the room as she removed the flask from her loose clothing. No one noticed as she broke its seal. When she started to release its contents into her hands and then on to Jesus’ head, the aroma of the ointment filled the house. Silence stole over the room as Jesus smiled at her with tears in His soft eyes. He knew what she was doing.

The Twelve did not smile. This was a waste of a valuable commodity. Someone, Judas probably, did the math and announced what a blessing this could have been to the poor.

Jesus did not agree.

“Let her alone. Why do you trouble her? She has done a good work for Me.”

He reminded them—again—that these days were of a special season. The poor will always be available but these moments will not come again.

“She has done what she could. She has come beforehand to anoint My body for burial.”

The party mood was gone now. Jesus had one more thing to say as the heavy fragrance hung in the air. It was about the preaching they were going to do.

“…wherever this gospel is preached in the whole world, what this woman has done will also be told as a memorial to her.”

From that moment, worship and preaching the Gospel have been linked. Each needs the other.

Scriptures
Mark 14:1-11
After two days it was the Passover and the Feast of Unleavened Bread. And the chief priests and the scribes sought how they might take Him by trickery and put Him to death. But they said, “Not during the feast, lest there be an uproar of the people.” And being in Bethany at the house of Simon the leper, as He sat at the table, a woman came having an alabaster flask of very costly oil of spikenard. Then she broke the flask and poured it on His head. But there were some who were indignant among themselves, and said, “Why was this fragrant oil wasted? For it might have been sold for more than three hundred denarii and given to the poor.” And they criticized her sharply. But Jesus said, “Let her alone. Why do you trouble her? She has done a good work for Me. For you have the poor with you always, and whenever you wish you may do them good; but Me you do not have always. She has done what she could. She has come beforehand to anoint My body for burial. Assuredly, I say to you, wherever this gospel is preached in the whole world, what this woman has done will also be told as a memorial to her.”

Prayer:
Lord Jesus, there are moments to be seized in this life; do not let me miss them. Mary worshiped You without regard for the opinions of others. Let me learn to do that! She ministered to You with the best gift she had. Let me learn that lesson, too. I will not offer to You a praise that costs me nothing. Holy Spirit, show me how to focus on Jesus as I worship. I want to sense deep in my spirit the same commendation that You gave Mary. “You have done a beautiful thing to me.” Lord, help me, as she did, to do what I can! Amen and amen.

1. One day a plain village woman
Driven by love for her Lord
Recklessly poured out a valuable essence
Disregarding the scorn
And once it was broken and spilled out
A fragrance filled all the room
Like a pris’ner released from his shackles
Like a spirit set free from the tomb

2. Lord You were God’s precious treasure
His loved and His own perfect Son
Sent here to show me
The love of the Father
Just for love it was done
And though You were perfect and holy
You gave up Yourself willingly
You spared no expense for my pardon
You were used up and wasted for me

In sweet abandon, let me be spilled out
And used up for Thee 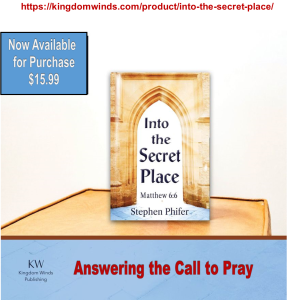