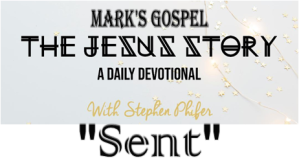 It is one thing to go. It is quite another to be sent.
Jesus knew deep in His heart that He was sent by God on a mission of redemption in the earth. In turn, Jesus sent others to share in His mission. The act of sending changed the lives of the ones who were sent. Their lives were divided by the call. Before the call their lives were their own; after the call, their lives were not their own—they were under a prior commitment. Before the call, their lives radiated the power of their personalities. After the call, another personality eclipsed their own. Jesus Himself moved in them, spoke through them, healed with their touch, and delivered with His authority sounding in their voices.

The Twelve
Jesus divided the twelve into six teams of two each. So there was an organizational plan. We are not given the rationale Jesus used in pairing up these men but we can be sure it made sense. Perhaps each team had a spokesman and a silent prayer partner. Whatever the plan was, Jesus knew how to put a team together. He still does!

He gave them power over unclean spirits. This means more than the exorcisms people would need. The powers of hell were focused on Jesus and His ministry. There was an ongoing spiritual warfare all around Jesus. Those in league with Satan, whether possessed by demons or merely evil people operating by their own sinful passions, were always set on edge by the presence of Jesus. When the six teams went out, they, too, would need power over all of hell’s devices and over the wickedness of powerful people whose petty little kingdoms were threatened by this Man from Galilee.

Traveling Light
Jesus shared His methodology with them—travel light. Have no concerns for what might happen. Trust God in every detail of life. The One who sends, always provides. Keep your traveling gear in order at all times. Stay with the people; join their households and families. You will be a blessing to them. But, when it is time to go, go! Someone in the next town must be similarly blest. If someone turns you away, that is their problem not yours. God will deal with them. From His instructions, the phrase, “shake the dust off your feet,” entered the languages of civilization. The rejecters will have to get in line with the citizens of Sodom and Gomorrah to receive their reward.

The Tour
The six 2-man teams made their tour and the results were fantastic. They did the same works in Jesus’ name that He had done: preaching repentance, healing the sick, and casting out demons. Their successful tour got the attention of Herod, one of those evil people in un-knowing league with Satan.

John, “a Man Sent From God.”
Herod thought he had disposed of John the Baptist. He was tricked into giving His word to a sensuous woman who danced for Him. She demanded the head of John. She got it. When the paranoid king got word of all the healing going on, he thought John was back from the grave.  It was actually a reasonable conclusion. When a person has been sent by God, a little thing like death may not stop him!

And so it is with us. Jesus has called us out. He has sent us into this world to continue His work. In His name we have power over the enemy. In His name we can preach repentance and see the sick raised to new health. Our lives are not our own. We have been bought with a price and we have been sent.

It is one thing to go. It is quite another to be sent.

Scriptures:
Mark 6:7-29
And He called the twelve to Himself, and began to send them out two by two, and gave them power over unclean spirits. He commanded them to take nothing for the journey except a staff — no bag, no bread, no copper in their money belts — but to wear sandals, and not to put on two tunics. Also He said to them, “In whatever place you enter a house, stay there till you depart from that place. And whoever will not receive you nor hear you, when you depart from there, shake off the dust under your feet as a testimony against them. Assuredly, I say to you, it will be more tolerable for Sodom and Gomorrah in the day of judgment than for that city!” So they went out and preached that people should repent. And they cast out many demons, and anointed with oil many who were sick, and healed them. Now King Herod heard of Him, for His name had become well known. And he said, “John the Baptist is risen from the dead, and therefore these powers are at work in him.” Others said, “It is Elijah. And others said, “It is the Prophet, or like one of the prophets.” But when Herod heard, he said, “This is John, whom I beheaded; he has been raised from the dead!” For Herod himself had sent and laid hold of John, and bound him in prison for the sake of Herodias, his brother Philip’s wife; for he had married her. Because John had said to Herod, “It is not lawful for you to have your brother’s wife.” Therefore Herodias held it against him and wanted to kill him, but she could not; for Herod feared John, knowing that he was a just and holy man, and he protected him. And when he heard him, he did many things, and heard him gladly. Then an opportune day came when Herod on his birthday gave a feast for his nobles, the high officers, and the chief men of Galilee. And when Herodias’ daughter herself came in and danced, and pleased Herod and those who sat with him, the king said to the girl, “Ask me whatever you want, and I will give it to you.” He also swore to her, “Whatever you ask me, I will give you, up to half my kingdom.” So she went out and said to her mother, “What shall I ask?” And she said, “The head of John the Baptist!” Immediately she came in with haste to the king and asked, saying, “I want you to give me at once the head of John the Baptist on a platter.” And the king was exceedingly sorry; yet, because of the oaths and because of those who sat with him, he did not want to refuse her. Immediately the king sent an executioner and commanded his head to be brought. And he went and beheaded him in prison, brought his head on a platter, and gave it to the girl; and the girl gave it to her mother. When his disciples heard of it, they came and took away his corpse and laid it in a tomb.

Prayer:
Lord Jesus, my life is divided by the call You placed on my life. Now I am under orders—Your orders. You have sent me into this place to do these things. Thank You for not sending me here in my own power. You share Your power with me. You send me forth in Your powerful name. Help me be patient with those who oppose me for many do not realize they are fighting against You. Help me be firm and uncompromising with opposition from evil spirits. They know what they are doing. Send Your angels to go before me and watch behind me for they too have been sent. For Your glory, Lord! Amen.