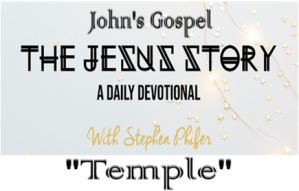 Marketplaces murder worship.
When worship leaders trade the prophetic for the profitable, they make a truly terrible bargain. They destroy the worship before it can traverse from the earthly to the heavenly. The songs, the confessions, the well-rehearsed gestures, and the beautiful vestments all become commodities stained with human pride and disqualified for the courts of heaven.

The Angry Jesus
The gospels relate only a very few incidents where Jesus showed public anger. Each of them involved the desecration of the true worship of Jehovah or the abuse of power. Why did the apostasy of the Temple anger Jesus so? Perhaps it was because Jesus remembered the Throne Room of God in Heaven. The tabernacles and temples the Jewish people built for worship were patterned after the Throne Room of God in heaven[–His Throne Room! (Hebrews 8:3-6) False worship desecrated this holy pattern.

Also, false worship did not deliver the promises of God to the people who came to worship with sincere hearts. They would come in obedience but go away unchanged, still laboring in their guilt and pain. Jesus had such great love both for the Temple and the people, this daily failure broke His heart. He would walk these same streets in power. He would heal and deliver in this same Temple Court. The wilderness would be His school and His healing station. But on this day, near the time of Passover, the power of God was missing from the House of God.

Jesus struck at the most visible representation of the apostasy—the Temple merchants. They were profiting from the sale of animals for use as sacrifices in the Temple, a severe desecration of the Holy Place.

With Whip in Hand
The sounds of worship—cymbals, chants, silver trumpets and ram’s horns—mixed with the sounds of commerce—animals and auctioneers, coins and clamorous hucksters, pickpockets and pious priests—greeted Jesus in the Temple courts.

“He made a whip of cords, (and) He drove them all out of the temple.”

Never was a there such a day in the Temple Courts. He shouted as He drove them out.

“Take these things away! Do not make My Father’s house a house of merchandise!”

His disciples were used to the commercial chaos in the Temple but today they ran for cover like everyone else. Some of them, though, could see His point though they had never before considered it. They remembered a verse from childhood.

“Zeal for Your house has eaten Me up.”

The Counter-Punch
After a time, things settled down and after a moment, beggar, thief, merchant, and priest alike, all scrambled to recover the scattered coins and corral the liberated livestock. The leaders made a quick huddle, elected a spokesman and challenged Jesus.

“What sign do You show to us, since You do these things?”

Seemed reasonable—a man has to have some sort of authority to create such a ruckus. Jesus answered with a whole new thought.

“Destroy this temple, and in three days I will raise it up.”

The leaders looked at each other and broke out laughing. They reported the facts—This Temple was 40 years in the construction and still unfinished—raise it up in three days? Laughter erupted all around.

Jesus did not explain that He was talking about a different Temple—His own body. He threw down the whip and departed the Temple; His men followed silently. The strength in His stride quenched the laughter like water thrown on a fire.

Scriptures:
John 2:13-12
Now the Passover of the Jews was at hand, and Jesus went up to Jerusalem. And He found in the temple those who sold oxen and sheep and doves, and the money changers doing business. When He had made a whip of cords, He drove them all out of the temple, with the sheep and the oxen, and poured out the changers’ money and overturned the tables. And He said to those who sold doves, “Take these things away! Do not make My Father’s house a house of merchandise!” Then His disciples remembered that it was written, “Zeal for Your house has eaten Me up.” So the Jews answered and said to Him, “What sign do You show to us, since You do these things?” Jesus answered and said to them, “Destroy this temple, and in three days I will raise it up.” Then the Jews said, “It has taken forty-six years to build this temple, and will You raise it up in three days?” But He was speaking of the temple of His body. Therefore, when He had risen from the dead, His disciples remembered that He had said this to them; and they believed the Scripture and the word which Jesus had said.
Hebrews 8:3-6 NKJV
For every high priest is appointed to offer both gifts and sacrifices. Therefore it is necessary that this One also have something to offer. For if He were on earth, He would not be a priest, since there are priests who offer the gifts according to the law; who serve the copy and shadow of the heavenly things, as Moses was divinely instructed when he was about to make the tabernacle. For He said, “See that you make all things according to the pattern shown you on the mountain.” But now He has obtained a more excellent ministry, inasmuch as He is also Mediator of a better covenant, which was established on better promises.

Prayer:
Lord Jesus, Your House is still to be a House of Prayer and nothing else—the prayers of praise, worship, adoration, intercession, faith and desperation. May we always keep Your House pure and free from lesser concerns. You have promised to meet with us when we pray, when we call out to You. You pledged to inhabit our praise and be enthroned upon our worship. I know You are faithful to these promises. Help me be faithful in prayer. Amen.

Song:
The Lord Is in His Holy Temple
Words: Habakuk 2:20; Music:George F. Root