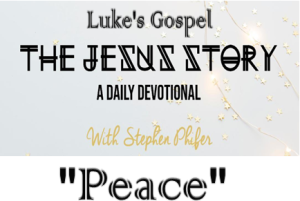 There are reunions and then, there are reunions.
Close families have reunions every year. Graduating classes hold reunions every 5 or 10 years. At each reunion, an informal role is called, noting the ones who could not attend or those who are no longer able to attend. The survivors, diminishing in number with every gathering, celebrate in the absence of those who are missing. The reunion of Jesus with His core group of followers was not at all like these gatherings.

Not a Memorial
The news was exiting! Women claimed to have seen Him and spoken to Him, as did Cleopas and his friend. If He were to appear again, surely it would be to a gathering of those who had followed Him in life. Of course, the record of these followers at the point of His arrest, trial, and execution was a troubling one. Peter, the de facto leader, wanted to see Jesus alive again but feared facing Him.

Still, this meeting was not a wake, not a memorial service. There was an expectation of something unforgettable. Each heart pulsed with the same heat reported by Cleopas, an inner fire Jesus put there. Would He not return to fan its flames?

When You Get What You Wished for…
Suddenly, without the aid of a door, Jesus “stood in the midst of them.” We can only imagine the impact of this:

Mixed with their delight was a natural fear, understandable in those who were more familiar with death and burial than with resurrection and visitation. Jesus spoke,

“Why are you troubled? And why do doubts arise in your hearts?”

At the sound of His voice, they fell silent. Each one wanted to touch Him but none dared to reach for Him. He invited them.

“Behold My hands and My feet, that it is I Myself. Handle Me and see,
for a spirit does not have flesh and bones as you see I have.”

They did not need to touch Him for they clearly saw the scars in His hands and feet. Some still did not believe this was really happening. To their surprise, Jesus asked for something to eat. They served Him broiled fish and a piece of honeycomb and He ate it.

Peace to You
Of all the things Jesus might have said to announce His resurrected presence, He chose to say,

This, of course, is the result of a battle won, of a victory secured, and of a future guaranteed. Because He lives, we who trust Him and believe can have true peace. The rest of the evening was characterized by this peace. Old issues were settled for many, although the deep wounds in Peter’s heart would linger until another meal, the one by the sea we learn about from John. None of the disciples had any idea what lay ahead for them but this they knew for sure: They had His peace.

Scriptures:
Luke:24:1-12 NKJV
Now as they said these things, Jesus Himself stood in the midst of them, and said to them, “Peace to you.” But they were terrified and frightened, and supposed they had seen a spirit. And He said to them, “Why are you troubled? And why do doubts arise in your hearts? Behold My hands and My feet, that it is I Myself. Handle Me and see, for a spirit does not have flesh and bones as you see I have.” When He had said this, He showed them His hands and His feet. But while they still did not believe for joy, and marveled, He said to them, “Have you any food here?” So they gave Him a piece of a broiled fish and some honeycomb. And He took it and ate in their presence.
John 14:25-28
“These things I have spoken to you while being present with you. But the Helper, the Holy Spirit, whom the Father will send in My name, He will teach you all things, and bring to your remembrance all things that I said to you. Peace I leave with you, My peace I give to you; not as the world gives do I give to you. Let not your heart be troubled, neither let it be afraid. You have heard Me say to you, ‘I am going away and coming back to you.’ If you loved Me, you would rejoice because I said, ‘I am going to the Father,’ for My Father is greater than I.
John 16:31-33
Jesus answered them, “Do you now believe? Indeed the hour is coming, yes, has now come, that you will be scattered, each to his own, and will leave Me alone. And yet I am not alone, because the Father is with Me. These things I have spoken to you, that in Me you may have peace. In the world you will have tribulation; but be of good cheer, I have overcome the world.”

Prayer:
Lord Jesus, You are the Lord of Life! The grave could not imprison You. You broke the chains of death. You took my sins into Joseph’s tomb and left them there. Forever You will bear the scars of our redemption in Your glorified body. How can such a thing be? And yet I believe the Gospel record. You entered that tomb as the Lamb of God Who takes away the sins of the world and You exited that tomb as King of kings and Lord of Lords, the Author and Finisher of our Faith! I have Your peace in my heart! The Lord is Risen—He is risen, indeed! Alleluia!

1. I serve a risen Savior He’s in the world today.
I know that He is living, Whatever men may say.
I see His hand of mercy; I hear His voice of cheer;
And just the time I need Him He’s always near.

2. In all the world around me I see His loving care
And though my heart grows weary, I never will despair;
I know that He is leading, Through all the stormy blast;
The day of His appearing Will come at last.

3. Rejoice, rejoice, O Christian, Lift up your voice and sing
Eternal hallelujahs To Jesus Christ the King!
The Hope of all who seek Him, The Help of all who find,
None other is so loving, So good and kind.