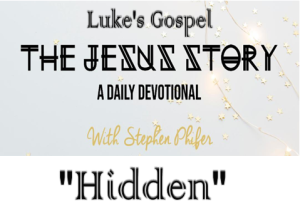 Although Jesus spoke clearly, there were some things the Twelve could not hear.
Though His imagery was perfectly clear, some things remained hidden from their eyes. Why? There are two possible answers:

A third possibility would be a combination of the two.

Preconceived Ideas
Of all the provocative things about Jesus, the most revolutionary was the news that He might be Messiah. As the oppression of the world-dominating Romans increased in detail and scope, the hope within the hearts of Old Covenant believers for a deliverer grew stronger with each tax season. The ancient promise of Messiah sounded a hopeful counterpoint to the drum beat of Roman soldiers on the march. The faithful called upon God for deliverance and the radicals became insurrectionists in futile attempts at rebellion. Each self-appointed deliverer claimed to be Messiah but proved to be just another rebel pinned to a cross. Self-anointed prophets rose up proclaiming the words of the ancient prophesies as if they were original but there were no signs and wonders to validate their claims. Caught in the middle were the leaders of the people who longed for Messiah but also had to do business with Rome.

Then came John, a prophet, but not one with signs and wonders and then finally, Jesus. As Jesus spoke and moved in unprecedented power and authority, “Messiah” was now a hope with an object, a true candidate, not a noisy prophet or a posturing rebel, but a Healer, a Deliverer, a Savior—Messiah?

Try as He might to remind the people and His disciples of the prophesies they chose to neglect, the idea that Messiah must first be the Suffering Servant of Isaiah’s book before He would reign as King of kings, Jesus did not dislodge their preconceived notions. These things were hidden from them.

God’s Doing
We must consider that there was a divine purpose in their blindness. In a classic case of first-things-first, the battle must be fought before the victory can be celebrated. Jesus walked this earth to do several things no one but Messiah could do:

The hidden thing was this: Messiah’s work must first be spiritual and personal to those who believed and later be political for the nation of promise. This was much more than Peter and his friends could handle at that time. Indeed, when the Holy Spirit opened their minds, they would spend the rest of their lives preaching it, writing it, and living it as they took the Jesus story to the world.

New Covenant Revelation
While hidden things remain—we will spend eternity enjoying their revelation!—we live in the age of revelation and we walk in increasing light.

Scriptures:
Luke: 18:31-34 NKJV
Then He took the twelve aside and said to them, “Behold, we are going up to Jerusalem, and all things that are written by the prophets concerning the Son of Man will be accomplished. For He will be delivered to the Gentiles and will be mocked and insulted and spit upon. They will scourge Him and kill Him. And the third day He will rise again.” But they understood none of these things; this saying was hidden from them, and they did not know the things which were spoken.
Ephesians 1:15-23 nKJV
Therefore I also, after I heard of your faith in the Lord Jesus and your love for all the saints, do not cease to give thanks for you, making mention of you in my prayers: that the God of our Lord Jesus Christ, the Father of glory, may give to you the spirit of wisdom and revelation in the knowledge of Him, the eyes of your understanding being enlightened; that you may know what is the hope of His calling, what are the riches of the glory of His inheritance in the saints, and what is the exceeding greatness of His power toward us who believe, according to the working of His mighty power which He worked in Christ when He raised Him from the dead and seated Him at His right hand in the heavenly places, far above all principality and power and might and dominion, and every name that is named, not only in this age but also in that which is to come. And He put all things under His feet, and gave Him to be head over all things to the church, which is His body, the fullness of Him who fills all in all.
Psalm 34:8 NKJV
Oh, taste and see that the Lord is good; Blessed is the man who trusts in Him!

Prayer:
Lord Jesus, as a New Covenant believer, I ask, as Paul did, for the Spirit of revelation. I want to taste and see the goodness of Your Kingdom! I want to know You in the power of Your resurrection and also in the fellowship of Your suffering. Show me the majesty of Your throne so I can fix my affections there. Let me measure the height and depth and width of Your grace in my life so that I will always be grateful to You. When answers to questions remain hidden to me, let me trust in Your character and hope in Your grace. And, Lord, when You reveal some hidden thing to me, let me walk in its light and celebrate its power. Thank You, Lord! Amen.

Song:
Open My Eyes that I May See
Words and Music: Clara H. Scott

1. Open my eyes, that I may see glimpses of truth you have for me;
place in my hands the wonderful key that shall unlock and set me free.
Silently now, on bended knee, ready I wait your will to see;
open my eyes, illumine me, Spirit divine!

2. Open my ears, that I may hear voices of truth you send so clear;
and while the message sounds in my ear, everything false will disappear.
Silently now, on bended knee, ready I wait your will to see;
open my ears, illumine me, Spirit divine!