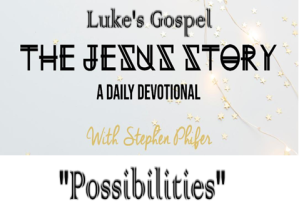 When the “Rich Young Ruler” turned away from Jesus, it broke the Lord’s heart.
If the young man never reconsidered his decision, a lifetime of exciting possibilities was forfeited for the sake of money—a tragedy of unending ramifications. Like a pebble never tossed into a lake, there would be no ripples. Such a rejection is

All the things a life lived for Jesus might do remained undone. What is the accumulated cost of a wasted life? It is the price of a soul, no, of countless souls. Yes, the Master’s heart was broken.

The Eye of a Needle
Some have tried to soften the image Jesus used of a camel going through the eye of a needle by suggesting He meant a small gate near a large one but such is not the case. Jesus spoke of the eye of a sewing needle and a full-sized camel—an example of hyperbole—using an impossible image to describe an impossible idea. Realizing this, the question of the people made perfect sense:

“Who then can be saved?”

It was thought that money was the answer to every need. If the rich could not be saved, then what hope was there for anyone?

What then, is possible?
Impossibilities are the things of a created universe. The handiwork of God is expansive and is still expanding. Yet, there are rules, elements, and forces at work within God’s creation that define the universe. Man observes the unexplained things and calls them random, evidence that there is no Creator at all, a universe of accidents. This is the observation of the blind, the verdict of those without judgment. We simply cannot see the rule, the element, the force that God has wrought. If we can’t see it, it isn’t there, right? Wrong! God is there!

Miracles are impossibilities made possible.
Jesus said it this way:

So, camels and needle’s eyes notwithstanding, the rich have equal access to the Kingdom of Heaven. When anyone makes it in, that is a miracle, an impossibility made possible only by grace. Anyone trusting in riches of any kind, money, power, influence, family, talent, knowledge, skill, anything at all, will fail to gain entrance. Trust in Jesus is the only way and that is always a miracle, another successful camel transit through another needle’s eye. Only the Blood of Jesus, repentance of sins, and confession of Jesus, only these things, open the New and Living Way.

Peter’s Confession
It was not a boast; it was a fact. Fishing boats and abandoned nets testified to the commitments of Peter, Andrew, James and John. The other eight disciples had their own tales of extreme commitment, their entrance points into the world of impossible possibilities.

Jesus smiled at His men. They looked at Him with wide eyes, awaiting His next Word whatever it might be, His next miracle, his next mission impossible. Yes, they loved Him. Yes, they were with Him and would remain so until…well…as long as they could. As He comforted them with His oft-repeated promise, His own spirits lifted. Like the sad opportunities missed, their lives would ripple through time to bless the multitudes to come.

Scriptures:
Luke: 18:24-30 NKJV
And when Jesus saw that he became very sorrowful, He said, “How hard it is for those who have riches to enter the kingdom of God! For it is easier for a camel to go through the eye of a needle than for a rich man to enter the kingdom of God.” And those who heard it said, “Who then can be saved?” But He said, “The things which are impossible with men are possible with God.” Then Peter said, “See, we have left all and followed You.” So He said to them, “Assuredly, I say to you, there is no one who has left house or parents or brothers or wife or children, for the sake of the kingdom of God, who shall not receive many times more in this present time, and in the age to come eternal life.”

Prayer:
Lord Jesus, I live in the universe You created. The possibilities within the rules of Creation are exciting and I revel in them: sunrises, sunsets, night skies, storms and the quiet times after them, causes and effects as dependable as the turning of the earth. But when I need a miracle from You, the rules You made can be suspended and the impossible happens just for me! You are the God of infinite space and the God of inches, the God of eternity and the God of my moments each day! Thank You for the miracle of Salvation and for the possibilities and impossibilities of following You! Amen.

Song:
Nothing Is Impossible
Words and Music: Eugene L. Clark

1. I read in the Bible the promise of God,
That nothing for Him is too hard;
Impossible things He has promised to do,
If we faithfully trust in His Word.

2. The word of the Lord is an anchor secure,
When winds of uncertainty blow:
Though man in his weakness may falter and fail,
His Word will not fail us we know.

3. All things are possible, this is His Word,
Receive it ‘tis written for you,
Believe in His promises, God cannot fail,
For what He has said He will do.