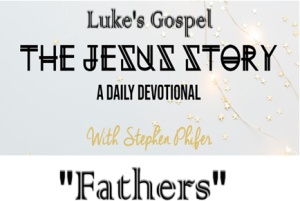 Two fathers; two sons.
One Father divine, His Son the embodiment of good, and the other father a man whose son was possessed by evil.

The Transfiguration
Peter, James, and John never knew what to expect when Jesus took them to a solitary place for prayer. The men were weary and solitude brought them sleep, not supplication. As Jesus prayed, they drifted off. The sound of different voices awakened them. They made out the images of two men of strange appearance talking with Jesus. As other-worldly as the two men appeared, they did not compare with Jesus. His clothes were shining white. His countenance glowed, too, with a glory they had never seen. Somehow they realized the identity of the two men: Moses and Elijah—the Law and the Prophets—represented by two heroes from heaven. This glorified trio was deep in a conversation—something about Messiah.

Peter had to say something. He suggested constructing a temporary memorial to each of the shinning visitors and one for Jesus, too. While these foolish words still sounded, a glory cloud came from everywhere and enveloped them all. From the cloud came a voice the men had never heard before. It was like the voice of Jesus, but deeper, richer, and somehow even more musical.

“This is My beloved Son. Hear Him!”

The Father had spoken. Jesus was greater than the Lawgiver, Moses. He was more truthful than all the prophets. He was the Son of God as well as the Son of Man. His was a voice to be heard in this singular way.

When the voice ceased, the men opened their eyes to see Jesus alone and returned to His very human appearance. They determined that this event could not be described to anyone so they agreed not to try.

A Grieving Father
The next day, when Jesus and the Inner Circle came down from the mountain, a crowd was waiting. In the crowd was a desperate father. His son was demon possessed. The evil spirit in him tried to destroy the child with bruising convulsions and seizures. While Jesus and the three were in the mountain, the man had brought his son to the remaining disciples for deliverance but they were not able to bring an end to this misery. Jesus lamented their lack of faith. They did not know how short the time was before the events discussed on the mountain would begin to unfold. Jesus instructed the father,

As the boy was delivered to Jesus, the demon in him threw him down in a violent seizure. Jesus was unimpressed by this desperate act of the demonic spirit, seemingly claiming the boy as his own. He was not the property of hell, but was a child of heaven, carefully made in the image of God. The boy had a place in the plan of God and his father was to be his guide, advisor, and inspiration for living. With a word, Jesus sent the demon back to hell. Gently, Jesus lifted the boy to his feet, healing every bruise and cut. He embraced the child and whispered something into his ear. The boy smiled, looking at his father. Astonished and relieved, the boy’s father took his son from Jesus’ arms and a deep silence fell on the crowd. The boy whispered something in his father’s ear and they both smiled, looking to Jesus.

Scriptures:
Luke: 9:27-42
But I tell you truly, there are some standing here who shall not taste death till they see the kingdom of God.” Now it came to pass, about eight days after these sayings, that He took Peter, John, and James and went up on the mountain to pray. As He prayed, the appearance of His face was altered, and His robe became white and glistening. And behold, two men talked with Him, who were Moses and Elijah, who appeared in glory and spoke of His decease which He was about to accomplish at Jerusalem. But Peter and those with him were heavy with sleep; and when they were fully awake, they saw His glory and the two men who stood with Him. Then it happened, as they were parting from Him, that Peter said to Jesus, “Master, it is good for us to be here; and let us make three tabernacles: one for You, one for Moses, and one for Elijah” — not knowing what he said. While he was saying this, a cloud came and overshadowed them; and they were fearful as they entered the cloud. And a voice came out of the cloud, saying, “This is My beloved Son. Hear Him!” When the voice had ceased, Jesus was found alone. But they kept quiet, and told no one in those days any of the things they had seen. Now it happened on the next day, when they had come down from the mountain, that a great multitude met Him. Suddenly a man from the multitude cried out, saying, “Teacher, I implore You, look on my son, for he is my only child. And behold, a spirit seizes him, and he suddenly cries out; it convulses him so that he foams at the mouth; and it departs from him with great difficulty, bruising him. So I implored Your disciples to cast it out, but they could not.” Then Jesus answered and said, “O faithless and perverse generation, how long shall I be with you and bear with you? Bring your son here.” And as he was still coming, the demon threw him down and convulsed him. Then Jesus rebuked the unclean spirit, healed the child, and gave him back to his father.

Prayer:
Lord Jesus, You told me to pray to my Father in heaven who already knows my needs. You said that He is in the Secret Place of Prayer waiting for me to join Him there. O how wonderful to be a child of heaven! To have a place in Your plan! To be cared for by such a gracious and loving Heavenly Father. More than all this, Your told Your men that when they had seen You, they had seen the Father! You are what God is like! Loving, kind, and forgiving even in Your holiness. Thank You, Jesus, for opening up the “new and living way” to the Father! Amen and Amen.

1. Children of the heav’nly Father, safely in His bosom gather;
nestling bird nor star in heaven  such a refuge e’er was given.

2. God His own doth tend and nourish; in His holy courts they flourish.
From all evil things He spares them; in His mighty arms He bears them.

3. Neither life nor death shall ever from the Lord His children sever;
unto them His grace He showeth, and their sorrows all He knoweth.

4. Though He giveth or He taketh, God His children ne’er forsaketh;
His the loving purpose solely to preserve them pure and holy.