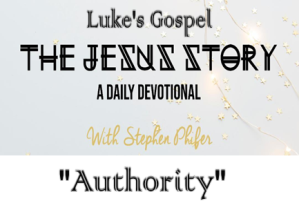 A Demonic among the Faithful
We don’t know how long this had gone on, or what family connections made it possible, but a regular attendee in that synagogue was infested with demon spirits. Judging from other demonic encounters in the Jesus Story, this man was most likely a disrupter of worship. He did not come to services to worship, but to keep others from worshiping. Demon spirits hate the worship of God! Perhaps they were envious because they wanted worship for themselves; this was their downfall ages ago. There must have been some reason why the people tolerated this unpredictable, random embarrassment. Perhaps an influential leader interceded for the poor man. The same authority in the words of Jesus that impressed the worshipers, aggravated the demons. They cried out against Him.

“Let us alone! What have we to do with You, Jesus of Nazareth?”

No! thought the leaders of the synagogue. Not now! Not for this nice boy from Nazareth? If there were prominent family members influential enough to override the will of the leaders, they must have lowered their eyes in shame. They knew better than to try and restrain him; the demons gave him supernatural strength. Jesus paused in His teaching. The demons in the man jumped into the silence.

“Did You come to destroy us? I know who You are — the Holy One of God!”

All semblance of worship was gone; this was now outright spiritual warfare. Jesus fixed his eyes on the unfortunate man and spoke past the man’s face to the corrupted spirit within him where the demons had taken up residence.

As a parting gesture, the demons threw the man to the floor of the synagogue, shaken but uninjured, and left him there as they fled.

It may be that the one who defended the demonized man lifted him from the floor and looked deep into his eyes. For the first time in memory, his eyes, and therefore his mind, were clear, clean from the shadows of evil. The delivered man knew what to do next—he worshiped God. Someone pointed out Jesus as the man who commanded the demons to leave. The man’s worship quickly focused on Jesus. It is likely that he, like so many others, fell at Jesus’ feet, weeping with thanksgiving.

Authority and Power
The congregation buzzed with excitement. The smartest among them began to calculate the implications of this authority and power for the People of God. Surely the Romans had met their match in Jesus. News of this spread throughout Galilee, even back to Nazareth where people did not want to hear about it.

Somewhere in the nether regions where demons go to sulk, these soldiers of Satan’s legions were ashamed to report their defeat at the hands of Jesus of Nazareth. Satan was not surprised. His corrupted angel soul still smarted from the beating he had taken in the wilderness.

Scriptures:
Luke: 4:31-37
Then He went down to Capernaum, a city of Galilee, and was teaching them on the Sabbaths. And they were astonished at His teaching, for His word was with authority. Now in the synagogue there was a man who had a spirit of an unclean demon. And he cried out with a loud voice, saying, “Let us alone! What have we to do with You, Jesus of Nazareth? Did You come to destroy us? I know who You are — the Holy One of God!” But Jesus rebuked him, saying, “Be quiet, and come out of him!” And when the demon had thrown him in their midst, it came out of him and did not hurt him. Then they were all amazed and spoke among themselves, saying, “What a word this is! For with authority and power He commands the unclean spirits, and they come out.” And the report about Him went out into every place in the surrounding region.

Prayer:
Lord Jesus, it simply is no contest! The devil is a defeated foe and You are the one who defeated him. He is a liar and the father of it. He hates You and he hates worship. He fears prayer in the Spirit so that’s what I am going to do. Help me to never fear the emissaries of the enemy. I will run into Your name as my strong tower and I will be safe there because You are the Victor! Amen and amen.

Song:
A Mighty Fortress Is Our God
Words and Music: Martin Luther

1. A mighty fortress is our God,
a bulwark never failing;
our helper he, amid the flood
of mortal ills prevailing.
For still our ancient foe
does seek to work us woe;
his craft and power are great,
and armed with cruel hate,
on earth is not his equal.

2. Did we in our own strength confide,
our striving would be losing,
were not the right Man on our side,
the Man of God’s own choosing.
You ask who that may be?
Christ Jesus, it is he;
Lord Sabaoth his name,
from age to age the same;
and he must win the battle.

3. And though this world, with devils filled,
should threaten to undo us,
we will not fear, for God has willed
his truth to triumph through us.
The prince of darkness grim,
we tremble not for him;
his rage we can endure,
for lo! his doom is sure;
one little word shall fell him.

4. That Word above all earthly powers
no thanks to them abideth;
the Spirit and the gifts are ours
through him who with us sideth.
Let goods and kindred go,
this mortal life also;
the body they may kill:
God’s truth abideth still;
his kingdom is forever!