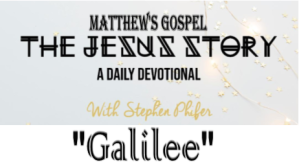 An essential part of sensing God’s will is to also sense His timing.
The arrest of John, the Forerunner, by the authorities in Jerusalem signaled to Jesus that the time was not yet for Him to minister in Judea. He departed to His home region of Galilee. Jerusalem and the Temple and the entrenched leadership there could wait for a while.

His ministry was different from that of John. He would call people to repentance as John did, but Jesus would also bring a new perspective on the Old Covenant; there was much teaching to be done and Galilee was a good place to start, far from the forces that had imprisoned John. There were sick, wounded, and disabled people who needed a healing touch. There were demon possessed people who needed a deliverer. Miracles would set the ministry of Jesus apart from that of John; they were the prophesied ministry of Messiah. These demonstrations of the power of God flowing through Jesus would tie the hands of provincial leaders in the towns of the north. How could they move against a fellow Galilean who was so obviously approved of God? No, it was not yet time for Jerusalem.

The Words of the Prophet Isaiah
There was also the witness of the Word of God. Isaiah predicted that Messiah would come from “Galilee of the Gentiles.” The Jewish population had grown considerably in the centuries since Isaiah wrote but Galilee was still a land of mixed cultures but with a dominant culture of Judaism.

The Prophet’s description of the culture was this:

“The people who sat in darkness…in the region of the shadow of death… have seen a great light.”

The light of truth shown in the local synagogues and in the homes of the Jewish faithful but the surrounding culture was one of darkness and “the shadow of death.” What does Matthew mean by this quote of Isaiah? Pagan cultures were cultures of death. Life was cheap. The worth of each individual, such an integral part of Judeo-Christian thought, was absent. Power and superstition ruled life. Some pagan religions demanded the sacrifice of infants. The only politics were those of force and the only morality was expediency. After several cycles of being conquered and delivered through the centuries, the Jews living in Galilee survived by being true to their covenantal relationship with God. They bonded together in tightly-knit communities. If Messiah could speak truth to Gentiles, He could reach anyone.

The Preaching of Jesus
The summation of Jesus’ preaching in Galilee was this:

“Repent, for the kingdom of heaven is at hand.”

This was a message for both the Jews and the Gentiles. Change was coming. A revolution was imminent. An emissary of Heaven had come to earth with Good News to share with everyone. He echoed John’s call to repentance, to a moment of reversal in one’s life, and He gave a reason to repent—there was to be a reckoning. A new Kingdom was near at hand! This Kingdom would not be one like the pagan nations, filled with violence and the shadow of death. It would be the Kingdom of Heaven, filled with joy like the sunrise and peace like the cool of the evening. Sins needed to be forsaken if one was to be a citizen of this Kingdom. The time had come to repent!

Prayer:
Lord Jesus, You began Your earthly ministry in Your home region. As beautiful as the region of Galilee may have been they had never seen anyone like You. Neither have I! Your love is amazing and constant. Your lovingkindness is indeed better than life. Your Word is truth I can count on today and for all my tomorrows. You care for me here and prepare a better place for me in the life to come. Thank You for making the journey from heaven to earth and from Your hometown to mine. “O how I love this man from Galilee!” Amen.

1. There’s a name that’s dear to me; Lifted me from misery;
Took me out of sin and shame. How I love His blessed name.
It gets sweeter every day. Serving Jesus really pays.
Oh how I love that Man of Galilee!

2. If the Lord you’ve never known, You should hasten to His Throne.
Such fulfillment you’ll receive, If in Him you will believe.
Life will be so sweet to you. You’ll call Him Sweet Jesus too.
Oh how I love that Man of Galilee!