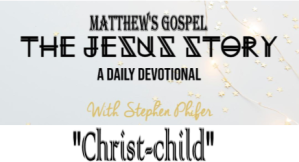 The miracle of the Incarnation is that God became a man.
The wonder of it all is that He became an infant, the most powerless of all human beings. This is the central mystery and fact of Christianity. It is a fact attested to by the most numerous and ancient of historical sources. No theologian has ever explained how it was done. In the early centuries of the church, leaders expended much effort and time and resources in conferences to try and figure whether Jesus was a man who became God or was He God in the form of man or something in between these possibilities. Various Creeds like the Nicene Creed go into detail to express the nature of God as a confessed belief and this is helpful. Statements of faith are needed but an explanation is not. We simply accept by faith that Jesus was both God and man, both at the same time. In order to become the Christ-child, the pre-incarnate Jesus had to lay aside His divine nature and take up His human nature. This is a mystery not to be explained, but to believe and to confess in worship.

The Most Promising Young Couple in Nazareth
In my imagination, they were the pride of the village.

All in all their betrothal was a bit of good news in those troubled times. People found hope for the nation in young people such as these.

“Before they came together…”
They were not yet husband and wife when Mary realized that she was pregnant. We know from other sources that she had been visited by the angel Gabriel and told that the Holy Spirit would overshadow her leaving her with child. It happened just as Gabriel said and Mary had the difficult duty of telling Joseph. As a carpenter, Joseph knew the measure of things and did not believe her story. Brokenhearted, he decided to handle things as discreetly as possible by sending her away. It was not to be. In a dream an angel appeared to him and told him the facts. Awaking from his sleep Joseph obeyed the angel’s words and took Mary as his wife. His love for her was so great, it negated logic and thus their marriage was an act of faith in God.

“Immanuel—God with Us”
When the child was born, they named Him “Jesus” as instructed. In addition, the prophet Isaiah said that He would be called Immanuel, meaning, “God with us.” Jesus means, “Savior.” And thus He came to be! He will go to the cross as a sinless Lamb to save us from the price of our sins and He will be the manifest presence of God in the earth. Mary “brought forth her firstborn Son”—fully God and fully man—the mystery of the ages.

Scriptures:
Matthew 1:18-25
Now the birth of Jesus Christ was as follows: After His mother Mary was betrothed to Joseph, before they came together, she was found with child of the Holy Spirit. Then Joseph her husband, being a just man, and not wanting to make her a public example, was minded to put her away secretly. But while he thought about these things, behold, an angel of the Lord appeared to him in a dream, saying, “Joseph, son of David, do not be afraid to take to you Mary your wife, for that which is conceived in her is of the Holy Spirit. And she will bring forth a Son, and you shall call His name Jesus, for He will save His people from their sins.” So all this was done that it might be fulfilled which was spoken by the Lord through the prophet, saying: “Behold, the virgin shall be with child, and bear a Son, and they shall call His name Immanuel,” which is translated, “God with us.” Then Joseph, being aroused from sleep, did as the angel of the Lord commanded him and took to him his wife, and did not know her till she had brought forth her firstborn Son. And he called His name Jesus.
Isaiah 7:14-15
Therefore the Lord Himself will give you a sign: Behold, the virgin shall conceive and bear a Son, and shall call His name Immanuel.

Prayer:
The Apostles’ Creed
The Book of Common Prayer (Adapted SRP)
I believe in God, the Father almighty, Creator of heaven and earth. I believe in Jesus Christ, His only Son, our Lord. He was conceived by the power of the Holy Spirit and born of the Virgin Mary. He suffered under Pontius Pilate, was crucified, died, and was buried. He descended to the dead. On the third day he rose again. He ascended into heaven, and is seated at the right hand of the Father. He will come again to judge the living and the dead. I believe in the Holy Spirit, the holy Christian Church, the communion of saints, the forgiveness of sins, the resurrection of the body, and the life everlasting. Amen.