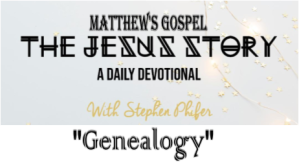 Just who was this man named Jesus?
Matthew had to prove that Jesus was qualified to be Messiah. To this purpose he did what any creditable historian would do, he consulted the official records. The scribes were excellent record keepers, especially genealogies. If Matthew had cheated in any way, crunching the names the way a crooked accountant can crunch the numbers, he would have been caught. His genealogy of Jesus was a challenge to any who took the history of the nation seriously. The claims of Jesus to be Messiah were sound from the standpoint of the records.

Luke’s genealogy differs from that of Matthew from David to Jesus. From Abraham to David they match up well. Why the differences? Several possible explanations are put forward including the fact that one person may be called by different names. The most likely reason is simple: Matthew traces the line through Joseph and Luke through Mary. Both were descendants of King David. Notice the switch from repeatedly listing fathers who “begot” each succeeding generation to a different process with Mary and Jesus:

“And Jacob begot Joseph the husband of Mary, of whom was born
Jesus who is called Christ.”

Matthew traces the rights of Jesus to the throne through Joseph back to Solomon, but is careful to point out that Mary alone birthed Jesus.

Important connections between Jesus and the heroes of the faith are found in this genealogy.

Women figure prominently in this list and each is a demonstration of God’s grace, giving us hope that in spite of failures, God can still use the repentant soul.

Matthew provided the proof needed to make his case for Jesus. One commentary says this:

“Matthew’s genealogy answered the important question a Jew would rightfully ask about anyone who claimed to be King of the Jews. Is He a descendant of David through the rightful line of succession? Matthew answered yes!” (The Bible Knowledge Commentary © 1983, 2000 Cook Communications Ministries)

Just who was this man named Jesus?
He was the virgin-born Son of Mary. He was the legal heir of King David. He was a certified son of Abraham. His story deserves to be told still today. He has the answers to the answerless dilemmas. He has the power of good over evil. He has written a New Covenant between God and man in His own holy blood. He is the firstborn from among the dead. He stands at the door of your heart, knocking and seeking entrance there. If You will let Him come in and take over, peace will be yours and forgiveness. There is no other source of these things. He is the One, the only hope for this earth. Hear His story and be challenged. Behold His glory and be changed!

Scriptures:
Matthew 1: 1-17
The book of the genealogy of Jesus Christ, the Son of David, the Son of Abraham: Abraham begot Isaac, Isaac begot Jacob, and Jacob begot Judah and his brothers. Judah begot Perez and Zerah by Tamar, Perez begot Hezron, and Hezron begot Ram. Ram begot Amminadab, Amminadab begot Nahshon, and Nahshon begot Salmon. Salmon begot Boaz by Rahab, Boaz begot Obed by Ruth, Obed begot Jesse, and Jesse begot David the king. David the king begot Solomon by her who had been the wife of Uriah. Solomon begot Rehoboam, Rehoboam begot Abijah, and Abijah begot Asa. Asa begot Jehoshaphat, Jehoshaphat begot Joram, and Joram begot Uzziah. Uzziah begot Jotham, Jotham begot Ahaz, and Ahaz begot Hezekiah. Hezekiah begot Manasseh, Manasseh begot Amon, and Amon begot Josiah. Josiah begot Jeconiah and his brothers about the time they were carried away to Babylon. And after they were brought to Babylon, Jeconiah begot Shealtiel, and Shealtiel begot Zerubbabel. Zerubbabel begot Abiud, Abiud begot Eliakim, and Eliakim begot Azor. Azor begot Zadok, Zadok begot Achim, and Achim begot Eliud. Eliud begot Eleazar, Eleazar begot Matthan, and Matthan begot Jacob. And Jacob begot Joseph the husband of Mary, of whom was born Jesus who is called Christ. So all the generations from Abraham to David are fourteen generations, from David until the captivity in Babylon are fourteen generations, and from the captivity in Babylon until the Christ are fourteen generations.
Colossians 1:15-18
He is the image of the invisible God, the firstborn over all creation. For by Him all things were created that are in heaven and that are on earth, visible and invisible, whether thrones or dominions or principalities or powers. All things were created through Him and for Him. And He is before all things, and in Him all things consist. And He is the head of the body, the church, who is the beginning, the firstborn from the dead, that in all things He may have the preeminence.
Philippians 2:5-11
Let this mind be in you which was also in Christ Jesus, who, being in the form of God, did not consider it robbery to be equal with God, but made Himself of no reputation, taking the form of a bondservant, and coming in the likeness of men. And being found in appearance as a man, He humbled Himself and became obedient to the point of death, even the death of the cross. Therefore God also has highly exalted Him and given Him the name which is above every name, that at the name of Jesus every knee should bow, of those in heaven, and of those on earth, and of those under the earth, and that every tongue should confess that Jesus Christ is Lord, to the glory of God the Father.

Prayer:
Lord Jesus, there is no one like You; there never was before and never will be again. Thank You for the Gospel record that still stands today as indisputable evidence though more than 2000 years old. I believe, Lord, I believe. I believe You. I believe my sins are forgiven and cast far away. I believe in Your call on my life and the work You have commissioned me to do. I will tell Your story till my dying breath. I believe in the life to come You are preparing for me. Thank You, Lord. Yes, I believe. Amen.

1. Fairest Lord Jesus, ruler of all nature,
O thou of God and man the Son,
Thee will I cherish, Thee will I honor,
thou, my soul’s glory, joy, and crown.

2. Fair are the meadows, fairer still the woodlands,
robed in the blooming garb of spring:
Jesus is fairer, Jesus is purer
who makes the woeful heart to sing.

3. Fair is the sunshine, fairer still the moonlight,
and all the twinkling starry host:
Jesus shines brighter, Jesus shines purer
than all the angels heaven can boast.

4. Beautiful Savior! Lord of all the nations!
Son of God and Son of Man!
Glory and honor, praise, adoration,
now and forevermore be thine.