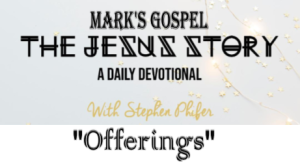 Offerings to God do not go unseen by heaven.
We may do everything in our power to hide our gifts from prying eyes and we regularly succeed. We succeed because we don’t want to get caught spying on the giving of someone else. Neither do we want them to know what we are doing. We cover up the cash in our hand until it is out of sight in the bucket or the bag and then we release it. Anyone watching us can think what they want about us and our offerings. When we write checks we place them in offering envelopes and it is nobody’s business but our own—and the money counters in the back room. They had better credit us with the right amount—taxes, don’t you know? All of this secrecy works on the human level but it is useless in the spiritual realm. God sees and remembers!

Resting in the Women’s Court
Jesus found a place to sit and rest after his bout with the scribes and Pharisees. There were public receptacles in the Women’s Court of the Temple where money was collected. Some commentaries say the money was for the expenses of worship supplies and others say it was for the relief of the poor. Regardless of its exact purpose, this was public giving and thus an opportunity for those who wanted to do some theatrical giving—giving for show, for effect.

Jesus sat and watched the show—rich people making grand gestures as their brass coins clanked into the receptacles. Some historians say these were metal horns which would offer several clanks per coin. There is even the suggestion that rich people would change more valuable coins into smaller, less valuable brass ones—more noise, you see—more impressive.

Just an Extra in the Drama
Into this grand drama of “giving” came a bit player, just a background “extra” from central casting—a poor widow. Perhaps she was one of the widow’s whose house had been “devoured” by the wicked rulers of the Temple. At any rate, she came, seeking above all things to be anonymous in her humble offering—two nearly worthless brass coins. They barely made a sound when she stretched her withered frame to drop them into the metal horn. Quickly, she shrunk back to her normal diminutive size to hurry away.

She had taken only a few steps when Jesus called her to His side. She wasn’t sure He meant her but a second gesture convinced her and in just a few steps she stood trembling before the Master. She was old but she knew what was happening. She knew who He was.

Jesus called the Twelve to Him:

“Assuredly, I say to you that this poor widow has put in more than all those who have given to the treasury;

The men and the woman were confused. How could this be? There was no way her gift could be greater than that the parade of the privileged and their clanking coins. What sort of math was Jesus using?

…for they all put in out of their abundance,
but she out of her poverty put in all that she had, her whole livelihood.”

Jesus was using heaven’s math wherein things are counted differently than they are on earth. To give out of one’s abundance does not count the same as to give out of one’s need. God has the ability to multiply the offering given sacrificially to meet the greatest need.

Jesus smiled at the elderly lady, perhaps thinking of his mother, Mary. His smile made the little widow blush like a fresh young bride.

Scriptures:
Mark 12:41-44
Now Jesus sat opposite the treasury and saw how the people put money into the treasury. And many who were rich put in much. Then one poor widow came and threw in two mites, which make a quadrans. So He called His disciples to Himself and said to them, “Assuredly, I say to you that this poor widow has put in more than all those who have given to the treasury; for they all put in out of their abundance, but she out of her poverty put in all that she had, her whole livelihood.”

Prayer:
Lord Jesus, You have given all for me. I give my all to You. Nothing else makes sense. I repent of any theatrical giving in the past. May You forget the noisy clanking of such offerings! Lead me in this area, Lord. There are so many needs crying out to me. Lead me to the sacrificial gifts that You can multiply to meet the needs. Thank You, Lord, for the privilege of partnering with You to the healing of the world. All for You, Lord Jesus, all for You!

Song:
Lord, I Give You My Heart
Words and Music: Darlene Zschech

This is my desire to honor You
Lord, with all my heart, I worship You
All I have within me, I give You praise
All that I adore is in You

Lord, I give You my heart
I give You my soul, I live for You alone
Every breath that I take, every moment I’m awake
Lord, have Your way in me