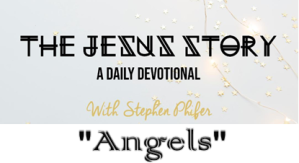 Angels were not born; they came to be when God spoke them into existence.
The birth of Jesus in the Bethlehem barn was not the first for the angels standing guard to witness. They all had been assigned to attend the birth of the children of God’s chosen people. Gabriel was there when Eve gave birth to Cain and to Able. He had guarded the infant Moses from birth to the tiny ark on the Nile to the palaces of Pharaoh. It’s what angels do. God’s love for people would not allow Him to leave a woman uncared for at such a painful and crucial time.

On the occasion of this birth, more than one angel attended.
The attention of the hosts of the Heaven was focused on the humble shack out back of the inn in Bethlehem. If those evil angels who prowled the earth had wanted to see these events, they could never have broken through the angelic cordon surrounding Mary and Joseph. No devilish spies had been able to penetrate the perimeter established around the mother of the Lord of Hosts. If angels breathe air the way we do, they were holding their breath with each moan and wince that escaped Mary’s lips. Their angelic muscles contracted with hers. This was perhaps the most human moment any of them would ever know. Why? For this was heaven invading earth, divinity embracing humanity, the Word of God entering the world as flesh, eternity merging with time, and both Spirit and Truth struggling to appear in one person.

The Mission
Mary’s labor was not long but she was not spared the pain all women know just because her Child was from the Holy Spirit. Such indulgences would never be hers. She would know the fullness of a mother’s pain from this moment until she visited a tomb some 30 years later. Her mission, like that of her Son, was to take the pain and turn it into blessing.

Joseph’s assistance was loving but there is so little a man can do for a woman in labor.
He can hold her hand and return the fierce grip of her contractions with his own counter force. In a masculine effort to encourage her, he can smile when she cannot. The effectiveness of this is probably just an illusion that comforts only him. He can pray. Joseph prayed. He somehow felt the presence of the angel who had visited each of them months before. Yes, there was a divine comfort in this awful place, unseen, but keenly felt. It was what the angels could do for Mary.

Finally, it happened.
A long sigh, a final push, and Jesus was born. A moment of deep silence, as the boy filled his lungs with the atmosphere of earth, was followed by his first cry. His tiny tears brought broad smiles to Mary and Joseph but their joy was overmatched by the hosts of heaven. Angels danced suspended in the air. They sang “Alleluia!” with all their strength and their strength is substantial. It was as if the floor of heaven had dropped spilling angels to the earth in raucous praise. It was like a friendly thunderstorm of worship lighting the earth in flashes of glory unseen by any on earth except a few humble shepherds, keeping watch over their flocks by night.

Scriptures:
Luke 1:26-38 NKJV
Now in the sixth month the angel Gabriel was sent by God to a city of Galilee named Nazareth, to a virgin betrothed to a man whose name was Joseph, of the house of David. The virgin’s name was Mary. And having come in, the angel said to her, “Rejoice, highly favored one, the Lord is with you; blessed are you among women!” But when she saw him, she was troubled at his saying, and considered what manner of greeting this was. Then the angel said to her, “Do not be afraid, Mary, for you have found favor with God. And behold, you will conceive in your womb and bring forth a Son, and shall call His name Jesus. He will be great, and will be called the Son of the Highest; and the Lord God will give Him the throne of His father David. And He will reign over the house of Jacob forever, and of His kingdom there will be no end.” Then Mary said to the angel, “How can this be, since I do not know a man?” And the angel answered and said to her, “The Holy Spirit will come upon you, and the power of the Highest will overshadow you; therefore, also, that Holy One who is to be born will be called the Son of God. Now indeed, Elizabeth your relative has also conceived a son in her old age; and this is now the sixth month for her who was called barren. For with God nothing will be impossible.” Then Mary said, “Behold the maidservant of the Lord! Let it be to me according to your word.” And the angel departed from her.
Matthew 1:18-25 NKJV
Now the birth of Jesus Christ was as follows: After His mother Mary was betrothed to Joseph, before they came together, she was found with child of the Holy Spirit. Then Joseph her husband, being a just man, and not wanting to make her a public example, was minded to put her away secretly. But while he thought about these things, behold, an angel of the Lord appeared to him in a dream, saying, “Joseph, son of David, do not be afraid to take to you Mary your wife, for that which is conceived in her is of the Holy Spirit. And she will bring forth a Son, and you shall call His name Jesus, for He will save His people from their sins.” So all this was done that it might be fulfilled which was spoken by the Lord through the prophet, saying: “Behold, the virgin shall be with child, and bear a Son, and they shall call His name Immanuel,” which is translated, “God with us.” Then Joseph, being aroused from sleep, did as the angel of the Lord commanded him and took to him his wife, and did not know her till she had brought forth her firstborn Son. And he called His name Jesus.
Luke 2:8-20 NKJV
Now there were in the same country shepherds living out in the fields, keeping watch over their flock by night. And behold, an angel of the Lord stood before them, and the glory of the Lord shone around them, and they were greatly afraid. Then the angel said to them, “Do not be afraid, for behold, I bring you good tidings of great joy which will be to all people. For there is born to you this day in the city of David a Savior, who is Christ the Lord. And this will be the sign to you: You will find a Babe wrapped in swaddling cloths, lying in a manger.” And suddenly there was with the angel a multitude of the heavenly host praising God and saying: “Glory to God in the highest, And on earth peace, goodwill toward men!” So it was, when the angels had gone away from them into heaven, that the shepherds said to one another, “Let us now go to Bethlehem and see this thing that has come to pass, which the Lord has made known to us.” And they came with haste and found Mary and Joseph, and the Babe lying in a manger. Now when they had seen Him, they made widely known the saying which was told them concerning this Child. And all those who heard it marveled at those things which were told them by the shepherds. But Mary kept all these things and pondered them in her heart. Then the shepherds returned, glorifying and praising God for all the things that they had heard and seen, as it was told them.

Prayer:
Lord Jesus, thank You for the protection of angels. At both the crucial and routine moments of life they guard us from harm. Working in league with the Holy Spirit who abides within the believer, Your strength and Your truth come to me just when I need them. I stand amazed at Your amazing salvation plan! You came from heaven to earth to rescue and redeem us! No wonder angels sang! Help me join their joy today, walking in the newness of life You won for me. No longer bound by sin, I am free to live rejoicing. Hallelujah! Amen.

1 Angels from the realms of glory, wing your flight o’er all the earth;
ye who sang creation’s story now proclaim Messiah’s birth:

2 Shepherds, in the field abiding, watching o’er your flocks by night,
God with us is now residing; yonder shines the infant light: