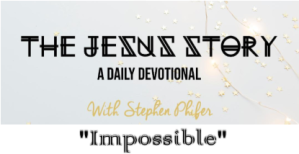 Gabriel’s words were the words that counted most.
The long-anticipated day finally arrived; Mary was home from her trip to Elizabeth’s house. Joseph appeared at the door to her home as nervous himself as a bride. When she came to the door the sight of her took his breath away. She had always been beautiful to him but now there was a glow from within that made her even more wonderful in his eyes. Her eyes met his straight on without a hint of shyness. She carried a confidence in herself and her mission that seemed to invite him into her faith.

Without speaking she took his hand led him confidently through the streets of Nazareth as villagers stopped what they had been doing to watch them. The murmuring and muttering did not faze either of them as they looked either straight ahead or at each other. Joseph knew where she was taking him. On they went through the town to a small hill that marked the edge of the village. The familiar path lifted them to the summit where the view of the surrounding fields was always inspiring. It was a favorite spot for them to meet and talk about the future. No talk would ever be as important as this one. In years to come, the boy Jesus would come to the brow of this hill to think and to pray. As a young man he would be led by an angry mob of worshipers to this very spot but that is another story.

Finally, a Chance to Talk
Mary’s revelation of her condition and her sudden exit to her cousin’s house for these months had been the darkest time in young Joseph’s life. In this quiet moment, the story of his struggle poured out of him like a pent up stream. Mary listened quietly, the knowing smile never leaving her face. He recited the things he knew for sure:

There seemed to be only one choice—to have her put away privately. He could never submit her to the mercy of the town. He paused, waiting for her to say something.

She was silent, still smiling, waiting for more. She was sure there was more.

The stream gushed again.
He told her of his sleepless nights and finally of the deep sleep in which he dreamed of an angel. It was more real than a dream. The angel told him to not be afraid to marry her and that the child was the son of God. They were to name him Jesus, for He would save His people from their sins.

The torrent of words past, Joseph took a deep breath and looked deeply into Mary’s eyes for her answer.

She smiled at him, took his hand and said this, the words of Gabriel to her, “With God, nothing is impossible.”

They sat quietly for the longest time. Few words passed between them because few words were needed.

Scriptures:
Matthew 1:16-25 NKJV
And Jacob begot Joseph the husband of Mary, of whom was born Jesus who is called Christ. So all the generations from Abraham to David are fourteen generations, from David until the captivity in Babylon are fourteen generations, and from the captivity in Babylon until the Christ are fourteen generations. Now the birth of Jesus Christ was as follows: After His mother Mary was betrothed to Joseph, before they came together, she was found with child of the Holy Spirit. Then Joseph her husband, being a just man, and not wanting to make her a public example, was minded to put her away secretly. But while he thought about these things, behold, an angel of the Lord appeared to him in a dream, saying, “Joseph, son of David, do not be afraid to take to you Mary your wife, for that which is conceived in her is of the Holy Spirit. And she will bring forth a Son, and you shall call His name Jesus , for He will save His people from their sins.” So all this was done that it might be fulfilled which was spoken by the Lord through the prophet, saying: “Behold, the virgin shall be with child, and bear a Son, and they shall call His name Immanuel,” which is translated, “God with us.” Then Joseph, being aroused from sleep, did as the angel of the Lord commanded him and took to him his wife, and did not know her till she had brought forth her firstborn Son. And he called His name Jesus.
Luke 1:39-45: 56 NKJV
Now Mary arose in those days and went into the hill country with haste, to a city of Judah, and entered the house of Zacharias and greeted Elizabeth. And it happened, when Elizabeth heard the greeting of Mary, that the babe leaped in her womb; and Elizabeth was filled with the Holy Spirit. Then she spoke out with a loud voice and said, “Blessed are you among women, and blessed is the fruit of your womb! But why is this granted to me, that the mother of my Lord should come to me? For indeed, as soon as the voice of your greeting sounded in my ears, the babe leaped in my womb for joy. Blessed is she who believed, for there will be a fulfillment of those things which were told her from the Lord.”
And Mary remained with her about three months, and returned to her house.

Prayer:
Lord Jesus, Joseph was a man of great faith. Let me follow his example. Let me have faith in You and in Your promises. I also need faith in others the way Joseph needed faith in Mary. Let me value and learn from what You are doing in the lives of my brothers and sisters. I need my brothers and sisters and they need me! Help me be faithful and full of faith! I want my life to be an adventure of faith, too, like that of Joseph and Mary. Also, may You live in me so large that all can see You! For Your Glory, Lord! Amen.