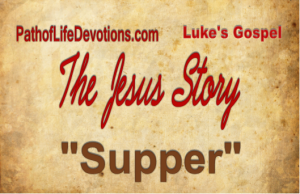 In the teaching of Jesus, a great metaphor for inclusion in the Kingdom of God was a dinner with invitations.
A shared meal is an important means of fellowship in the Kingdom of God. Under the Old Covenant, the remembrance of God’s miraculous deliverance from Egyptian bondage was the Passover Meal. Each week the families of Israel kept their faith alive from generation to generation with the Seder meal on Friday evenings. In the New Covenant, the Lord’s Table, also called the “Eucharist,” meaning, “The Great Thanksgiving,” and “Holy Communion,” is a ceremonial shared meal that renews the Covenant.

A Sabbath Meal
It happened that one of the rulers of the Pharisees invited Jesus to a Sabbath dinner at his own home. This was done with a hidden purpose; to catch Jesus in some violation of Sabbath tradition. A man suffering from edema, a condition arising from congestive heart failure causing swelling in the soft body tissues, was also there. It is possible he was a plant to test Jesus. Seeing the set-up, Jesus asked,

“Is it lawful to heal on the Sabbath?”

The Pharisee did not answer. In short order, Jesus healed the man and sent him on his way. He asked another question:

“Which of you, having a donkey or an ox that has fallen into a pit, will not immediately pull him out on the Sabbath day?”

The Pharisees had no answer so Jesus told them the parable about dinner placement, warning His listeners not to take the place of honor until it is offered. The principle?

Kingdom Hospitality
Using the metaphor of an invited supper, Jesus turned polite society on its head. Do not invite those who are already your friends—reach out to those who are outside of your fellowship.

“…the poor and the maimed and the lame and the blind.’

To invite those in great need who cannot repay pleases the Lord. God will bless you when you include the disadvantaged in your feast.

The Parable of the Great Feast
A minimalist at the dinner declared that what really counted was just getting to eat the bread of the Kingdom. In other words, “Let me get mine. I don’t care about anyone else.” This brought one of the great parables from the lips of Jesus.

An important man gave a huge, by-invitation-only-feast. Many people were invited so he sent a servant at the startup time to bring the people in. Instead of guests, he got excuses, lame excuses. So he sent his servant to the disadvantaged. This was the same list Jesus had already given.

“…the poor and the maimed and the lame and the blind.’

These invited ones responded joyfully and there was still room for more. The next invitation provides us with a well-known description of the needy people of the world. The servant was told to go to “the highways hedges and compel them to come in.” There was no discrimination, no selection criteria, and no means-testing. It was pure grace. At last the house was filled and the great supper was served.

Life Lesson? People who are self-sufficient, self-satisfied, and self-centered will miss out on the good things of the Kingdom. Those who know they have need of God will be the ones who feast at His great supper.

Scriptures:
Luke: 14:1-24
Now it happened, as He went into the house of one of the rulers of the Pharisees to eat bread on the Sabbath, that they watched Him closely. And behold, there was a certain man before Him who had dropsy. And Jesus, answering, spoke to the lawyers and Pharisees, saying, “Is it lawful to heal on the Sabbath?” But they kept silent. And He took him and healed him, and let him go. Then He answered them, saying, “Which of you, having a donkey or an ox that has fallen into a pit, will not immediately pull him out on the Sabbath day?” And they could not answer Him regarding these things. So He told a parable to those who were invited, when He noted how they chose the best places, saying to them: “When you are invited by anyone to a wedding feast, do not sit down in the best place, lest one more honorable than you be invited by him; and he who invited you and him come and say to you, ‘Give place to this man,’ and then you begin with shame to take the lowest place. But when you are invited, go and sit down in the lowest place, so that when he who invited you comes he may say to you, ‘Friend, go up higher.’ Then you will have glory in the presence of those who sit at the table with you. For whoever exalts himself will be humbled, and he who humbles himself will be exalted.” Then He also said to him who invited Him, “When you give a dinner or a supper, do not ask your friends, your brothers, your relatives, nor rich neighbors, lest they also invite you back, and you be repaid. But when you give a feast, invite the poor, the maimed, the lame, the blind. And you will be blessed, because they cannot repay you; for you shall be repaid at the resurrection of the just.” Now when one of those who sat at the table with Him heard these things, he said to Him, “Blessed is he who shall eat bread in the kingdom of God!” Then He said to him, “A certain man gave a great supper and invited many, and sent his servant at supper time to say to those who were invited, ‘Come, for all things are now ready.’ But they all with one accord began to make excuses. The first said to him, ‘I have bought a piece of ground, and I must go and see it. I ask you to have me excused.’ And another said, ‘I have bought five yoke of oxen, and I am going to test them. I ask you to have me excused.’ Still another said, ‘I have married a wife, and therefore I cannot come.’ So that servant came and reported these things to his master. Then the master of the house, being angry, said to his servant, ‘Go out quickly into the streets and lanes of the city, and bring in here the poor and the maimed and the lame and the blind.’ And the servant said, ‘Master, it is done as you commanded, and still there is room.’ Then the master said to the servant, ‘Go out into the highways and hedges, and compel them to come in, that my house may be filled. For I say to you that none of those men who were invited shall taste my supper.'”

Prayer:
Lord Jesus, rescue me from pride and position! Help me take the lower place in public, leaving the place of honor to others. Save me from hard-hearted assessments of my fellow human beings. May I never see others us unworthy and myself as deserving of honor. Lord Jesus, send me to the highways and hedges and help me compel the lost to come into the feast You have prepared. It is for them, prepared with love from Your skillful hand. For Your glory, Lord! Amen.

1. “All things are ready,” come to the feast!
Come, for the table now is spread;
Ye famishing, ye weary, come,
And thou shalt be richly fed.

2. “All things are ready,” come to the feast!
Come, for the door is open wide;
A place of honor is reserved
For you at the Master’s side.

3. “All things are ready,” come to the feast!
Come, while He waits to welcome thee;
Delay not while this day is thine,
Tomorrow may never be.

4. “All things are ready,” come to the feast!
Leave ev’ry care and worldly strife;
Come, feast upon the love of God,
And drink everlasting life.