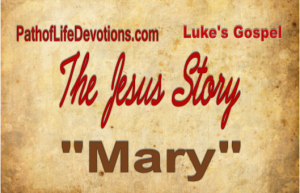 No one questioned the integrity of Mary.
Growing up in a small town, everybody knew everything about everybody. Her beauty was more than a perfectly proportioned face; it came from within like a flame in her heart. She was no flirt and the young men kept their distance, all except Joseph. He was her match in the eyes of the citizens of Nazareth. There was no reason to worry about those two.

Gabriel
The same angel who visited Elizabeth, whose job it was to stand in the presence of God, was assigned another trip to planet earth, this time to Nazareth. He appeared to her saying,

“Rejoice, highly favored one, the Lord is with you; blessed are you among women!”

Naturally, fear gripped her heart but she was also troubled by the words of Gabriel. She did not consider herself highly favored or blessed among women. The angel went on to tell her that she had been chosen by God to have a son to be named Jesus.

“He will be great, and will be called the Son of the Highest; and the Lord God will give Him the throne of His father David. And He will reign over the house of Jacob forever, and of His kingdom there will be no end.”

Mary tried to take it all in but it was beyond her heart to understand. She and Joseph were engaged to be married but were not yet husband and wife. How could she have a son before that happened?

The Holy Spirit
Gabriel was ready with the blessed answer to her question. Jesus was not to be Joseph’s child. The Holy Spirit would “overshadow” Mary and the child would begin His earthly ministry within her.

“…that Holy One who is to be born will be called the Son of God.”

Immediately Mary thought of Joseph and their small village lives. What will he think of her? What will people think of them? She knew that their lives were changed forever.

Elizabeth
There was more news; Mary’s cousin, Elizabeth, had conceived a child in her old age. It seemed that with God nothing was impossible. Mary’s response, so quietly spoken, echoed through heaven causing unnumbered angels to dance,

“Behold the maidservant of the Lord! Let it be to me according to your word.”

As quickly as he came, Gabriel departed. Mary knew of two things she had to do:

She hastily arranged a surprise trip south to the hill country of Judea to the home of Zacharias and Elizabeth. When the older mother-to-be heard Mary’s greeting, the child within her jumped, startling Elizabeth. At the same moment, she was filled with the Holy Spirit thus making a divine connection between her child and Mary’s child.

Mary’s prophetic song, improvised at that moment, has become known as the Magnificat. It was a prophecy of things to come. For three months these two blessed women enjoyed a fellowship of the Spirit we cannot begin to imagine. When her condition started becoming visible, Mary returned to face her Joseph.

Scriptures:
Luke: 1:26-56
Now in the sixth month the angel Gabriel was sent by God to a city of Galilee named Nazareth, to a virgin betrothed to a man whose name was Joseph, of the house of David. The virgin’s name was Mary. And having come in, the angel said to her, “Rejoice, highly favored one, the Lord is with you; blessed are you among women!” But when she saw him, she was troubled at his saying, and considered what manner of greeting this was. Then the angel said to her, “Do not be afraid, Mary, for you have found favor with God. And behold, you will conceive in your womb and bring forth a Son, and shall call His name Jesus. He will be great, and will be called the Son of the Highest; and the Lord God will give Him the throne of His father David. And He will reign over the house of Jacob forever, and of His kingdom there will be no end.” Then Mary said to the angel, “How can this be, since I do not know a man?” And the angel answered and said to her, “The Holy Spirit will come upon you, and the power of the Highest will overshadow you; therefore, also, that Holy One who is to be born will be called the Son of God. Now indeed, Elizabeth your relative has also conceived a son in her old age; and this is now the sixth month for her who was called barren. For with God nothing will be impossible.” Then Mary said, “Behold the maidservant of the Lord! Let it be to me according to your word.” And the angel departed from her. Now Mary arose in those days and went into the hill country with haste, to a city of Judah, and entered the house of Zacharias and greeted Elizabeth. And it happened, when Elizabeth heard the greeting of Mary, that the babe leaped in her womb; and Elizabeth was filled with the Holy Spirit. Then she spoke out with a loud voice and said, “Blessed are you among women, and blessed is the fruit of your womb! But why is this granted to me, that the mother of my Lord should come to me? For indeed, as soon as the voice of your greeting sounded in my ears, the babe leaped in my womb for joy. Blessed is she who believed, for there will be a fulfillment of those things which were told her from the Lord.” And Mary said: “My soul magnifies the Lord, And my spirit has rejoiced in God my Savior. For He has regarded the lowly state of His maidservant; For behold, henceforth all generations will call me blessed. For He who is mighty has done great things for me, And holy is His name. And His mercy is on those who fear Him From generation to generation. He has shown strength with His arm; He has scattered the proud in the imagination of their hearts. He has put down the mighty from their thrones, And exalted the lowly. He has filled the hungry with good things, And the rich He has sent away empty. He has helped His servant Israel, In remembrance of His mercy, As He spoke to our fathers, To Abraham and to his seed forever.” And Mary remained with her about three months, and returned to her house.

Prayer:
Lord Jesus, may I be as willing as Mary to accept Your divine call! Help me to do what I can do and leave the impossible things to You. I am not in this world by accident. You have had a plan for me since before the beginning. My job is to obey You and follow Your plan every day. When I need miracles, You will provide them. When I need strength, I can lean on You. When I need truth, I listen to Your voice. When I need comfort, I feel Your arms around me. Let it be to me according to Your will! Amen.

Song:
Sing Out, My Soul
Words and Music: Ralph Carmichael